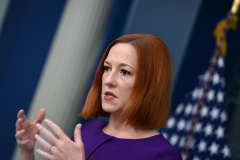 On Thursday, the Alabama state legislature passed a bill that would make it a Class C felony for doctors to prescribe such medical treatments to transgender kids, including genital surgery except for circumcision. The ban does not apply to children with sexual development disorders. If convicted, doctors face up to 10 years behind bars.

“Today in Alabama, instead of focusing on critical kitchen-table issues like the economy, COVID, or addressing the country’s mental health crisis, Republican lawmakers are currently debating legislation that, among many things, would target trans youth with tactics that threatens to put pediatricians in prison if they provide medically necessary, lifesaving healthcare for the kids they serve,” she said.

“Just like the extreme government overreach we’ve seen in Texas, where politicians have sent state officials into the homes of loving parents to investigate them for abuse — just to harass and intimidate the LGBTQI+ community — today’s vote in Alabama will only serve to harm kids,” the press secretary said.

“But Alabama’s lawmakers and other legislators who are contemplating these discriminar- — discriminatory bills have been put on notice by the Department of Justice and the Department of Health and Human Services that laws and policies preventing care that healthcare professionals recommend for transgender minors may violate the Constitution and federal law,” Psaki said.

“To be clear, every major medical association agrees that gender-affirming healthcare for transgender kids is a best practice and potentially lifesaving,” the press secretary said.

“All of this begs an important question: What are these policies actually trying to solve for?  LGBTQI+ people can’t be erased or forced back into any closets, and kids across our nation should be allowed to be who they are without the threat that their parents or their doctor could be imprisoned simply for helping them and loving them,” she said.

“President Biden has committed in both words and actions to fight for all Americans and will not hesitate to hold these states accountable,” Psaki said.