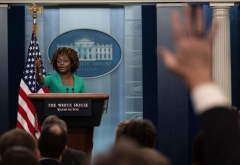 “Given the frequency with which President Biden works in Delaware, what is the case against having visitor logs for his house?” a reporter asked.

“I am going to refer you to the White House Counsel. They actually addressed this.  They answered this question that you are asking me, I believe, on Sunday, and I also believe the Secret Service put out a statement. So I would refer you to those two statements that — that came out from — from the White House,” the press secretary said.

“I want to reference an interview that President Biden did in mid-September with ‘60 Minutes,’  and in that interview, he chided former President Trump for having in his possession classified documents. He called it ‘irresponsible.’ First of all, do you think it was proper for President Biden to comment on an ongoing DOJ investigation?” a reporter asked.

“Can I ask just a follow-up to what you said earlier about the president being surprised the documents were even there — that he said multiple times, you’ve said again he was unaware that these classified documents were even in his garage, in his residence?” a reporter said.

“Given that you could actually just be surprised that documents were there, does that suggest to you, to this White House that reform is needed, there needs to be changes for how classified documents are tracked through the U.S. government?” the reporter asked.

“Just to be clear, my question is about procedures here at the White House and not about anything specific related to the DOJ investigation. So I’m just wondering how this episode has prompted a review of the process in which staffers handle classified information and how they are turned over to National Archives during a transition,” CBS News White House Correspondent Weija Jiang asked.

JEAN-PIERRE:  And to be clear, I’m going to refer you to my colleagues at the White House Counsel’s Office. They will be able to address that particular questions. I’m just not going to address something that is even related to an ongoing legal process.

JIANG: But why not? I mean, I’m having a hard time understanding why questions about  procedure would impact the investigation.

JIANG: Okay.  Is President Biden satisfied with the current SOP of handling classified materials here and turning them over to National Archives?

JEAN-PIERRE:  Again, I will refer you to the White House Counsel’s Office. They are the — they’re the people who would be able to answer that question about classified information.

JIANG: So, just to be clear: From this point on, are you not going to be taking questions about the classified documents?

JEAN-PIERRE:  I have been very clear over and over again we are going to be prudent here.  We’re going to be consistent. This particular matter is being — is being looked at.

There’s a legal process currently happening at the Department of Justice, and I’m going to refer you to the Department of Justice on any specifics to this particular case, and anything that has to deal with our — what we’re doing here, I would refer you to the White House Counsel’s Office, and let me remind you this is — this is — this is not a new process here.

We’ve been doing this for the past two years. Anything that is related to a legal process, a legal matter, we refer it to the Department of Justice.  There’s nothing new in our process here.