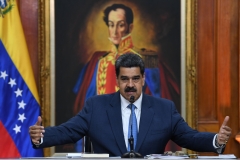 Venezuela's President Nicolas Maduro gestures during a press conference with members of the foreign media at Miraflores palace in Caracas, on February 14, 2020. (Photo by YURI CORTEZ/AFP via Getty Images)

(CNSNews.com) - The White House was pressed to explain its decision Monday to reach out to Saudi Arabia, Venezuela, and Iran about possibly supplying oil to the United States as it also considers a possible ban on Russian oil imports.

“Administration officials are meeting with foreign counterparts in Venezuela. You’ve also talked to Iran and the Saudis. Is the supply of oil so important that it’s acceptable to cut deals in some cases with countries that may have engaged in unsavory actions in the past?” a reporter with the Associated Press asked.

Psaki pointed out that “we did talk a few weeks ago about how” National Security Council Middle East coordinator Brett McGurk and the State Department's energy envoy, Amos Hochstein, traveled to Saudi Arabia “to discuss a range of issues, including the war in Yemen, including security in the region, and certainly including energy security.”

“They had the discussion that’s in everyone’s interest to reduce the impact on the global oil marketplace, and that was part of that discussion,” the press secretary said.

“As it relates to Venezuela, the purpose of the trip that was taken by administration officials was to discuss a range of issues including certainly energy security but also to discuss the health and welfare of detained U.S. citizens. We’re never going to miss an opportunity to do exactly that, and I will just note in this scenario that they are separate. They are separate paths and conversations just as they are in the Iran negotiations,” she said.

“And Iran, the most vital reason, the most important reason why we are focused and have been focused on having these discussions with the Iranians and our P5 + 1 partners is to prevent Iran from acquiring a nuclear weapon. That is why we’re in these negotiations. We are getting closer,” Psaki said.

“There are still important components to work through, but certainly the discussion of oil, but the most important reason is to prevent them from acquiring a nuclear weapon, so I would just note, and I went through all of those purposefully obviously because these are all geopolitical issues that have a range of topics that are a part of the discussion and our engagements,” she said.

The press secretary said that no decision has been made at this point about banning Russian oil imports, “and those discussions are ongoing internally and also with our counterparts and partners in Europe and around the world.”

“I would note that what the president is most focused on is ensuring we are continuing to take steps to deliver punishing economic consequences on Putin while taking all action necessary to limit the impact to prices at the gas pump, and as you noted, yes, it is true that there has obviously been an impact of the invasion on the level of import to the United States and to other parts of the world,” Psaki said.

“I would note as we’re having these conversations, and obviously, the president talked with a number of his European partners this morning about a range of issues. This was part of it, but if you look at Russian imports, they account for about a third currently of Europe’s oil imports, so the data we have available at this point in time is back to 2021, not that long ago,” the press secretary said.

“To give you a point of comparison, the amount that the United States was importing back in 2021, before the invasion, was about 700,000 barrels a day of crude oil and petroleum. The Europeans import about 4.5 million barrels per day of oil, so obviously we’re also very well aware as we’re having these conversations, and as we’re consulting with our partners that there would be– we have different capacities and capabilities,” she said.

“And I want to go back to one of the three countries that Josh mentioned - Venezuela. There was a U.S. team there this weekend talking to the Maduro regime. Sanctions have been in place since 2019, lack of diplomatic engagement since then because of electoral fraud because of all the things that that regime has done to the Venezuelan people,” he said.

“I hear you say we’re doing everything we can to bring down the cost of gas, but is it really worth doing business with a despot like Nicholas Maduro to drive down gas prices?” O’Keefe asked.

“First I think that’s leaping several stages in any process. There was a discussion that was had by members of the administration. Over the course of the last several days, those discussions are also ongoing, and part of our focus is also on the health and welfare of detained U.S. citizens,” Psaki said.