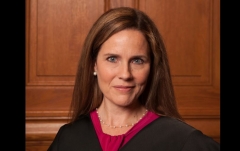 (CNS News) -- Judge Amy Coney Barrett, who was nominated to the Supreme Court on Saturday, is a devout Catholic who told the 2006 graduating class of Notre Dame Law School that their "fundamental purpose in life is not to be a lawyer, but to know, love, and serve God...."

At the time, 2006, Barrett was a professor of Law at Notre Dame, and in her "Diploma Ceremony Address" Barrett explained that she wanted to impart to the new graduates what it might mean to be "a different kind of lawyer."

Judge Amy Coney Barrett speaks after being nominated to the US Supreme Court by President Donald Trump in the Rose Garden of the White House in Washington, DC on September 26, 2020. - Barrett, if confirmed by the US Senate, will replace Justice Ruth Bader Ginsburg, who died on September 18. (Photo by OLIVIER DOULIERY/AFP via Getty Images)

"So what then, does it mean to be a different kind of lawyer?" she said.  "The implications of our Catholic mission for your legal education are many, and don’t worry—I’m not going to explore them all in this short speech. I’m just going to identify one way in which I hope that you, as graduates of Notre Dame, will fulfill the promise of being a different kind of lawyer."

"And that is this: that you will always keep in mind that your legal career is but a means to an end," she said,  and "that end is building the kingdom of God. You know the same law, are charged with maintaining the same ethical standards, and will be entering the same kinds of legal jobs as your peers across the country."

"But if you can keep in mind that your fundamental purpose in life is not to be a lawyer, but to know, love, and serve God, you truly will be a different kind of lawyer," said Barrett, who earned her law degree at Notre Dame.

The professor, who has been a federal circuit court appeals judge since 2017, then gave the students three points of advice to help them in their careers and family life.

"First, before you take any job, particularly one that requires a move, pray about it," said Barrett. "Pray about your career choices before you make them. If you do, I think you will be successful at tempering the influence of ambition as the overriding force in your decision-making."

She continued,  "My second suggestion is that you give away 10 percent of what you earn to the church, charitable causes, and to friends and acquaintances who need it. Tithing will help you remember that your career and the money you earn shouldn’t be directed just toward your own betterment but ought to be directed, in a tangible way, toward the common good. I recommend that you begin this practice with your first paycheck."

"When you get where you’re going, carry Notre Dame with you," she said.  "Deliberately choose a parish or church that has an active community life and commit yourself deeply to the relationships you find there."

Amy Coney Barrett, 48, is married and has seven children, two of whom were adopted from Haiti. She serves on the U.S. Court of Appeals for the Seventh Circuit, a position for which she was confirmed by the U.S. Senate in 2017.

President Trump nominated Barrett on Sept. 26 to replace Associate Justice Ruth Bader Ginsburg, who died of cancer on Sept. 18, at the age of 87.