Biden Nominates First Openly Lesbian, Filipino Woman to be No. 2 at Air Force 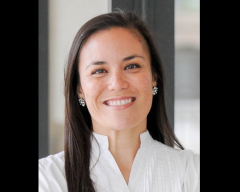 (CNS News) -- On Tuesday, April 27, Democratic President Joe Biden announced that he had nominated Gina Ortiz Jones to be the Undersecretary of the Air Force, the No. 2 position at that military branch. If confirmed by the U.S. Senate, Jones will be the first openly gay, Filipino woman to serve in that post.

Jones, 40, went to Boston University through its Air Force ROTC program. Once in the Air Force, she served as an intelligence officer and was deployed to Iraq where she supported air-support operations. Jones also earned a Master's degree at the School of Advanced Military Studies of the U.S. Army Command and General Staff College.

In 2006, Jones left the Air Force, having served only three years, and eventually took a job at the Defense Intelligence Agency and then with the Office of the U.S. Trade Representative.

She left that position in June 2017, telling Elle magazine, "The folks who were brought in to do the nation’s work were not interested in the public, much less service, much less public service. It was clear that I was going to have to serve my community and my country in a different way."

The Biden Administration continues to prioritize qualified out voices - and @GinaOrtizJones' record of dedicated public service speaks for itself. We're with you, Gina! Congratulations! https://t.co/Urm4tTOoi7

On Jones's nomination to be Undersecretary of the Air Force, Jennifer Dane, executive director of the Modern Military Association of America, which advocates for LGBTQ+ service members and veterans, told the Dallas Morning News, “We are beyond thrilled. She represents diverse intersections of minority groups.... She knows firsthand what damaging effects discriminatory policies like ‘don’t ask, don’t tell’ have on the health and well-being of the force.”

The LGBTQ Institute tweeted, "The Biden Administration continues to prioritize qualified out voices -- and @GinaOrtizJones record of dedicated public service speaks for itself. We're with you, Gina! Congratulations!"

House Rep. Adam Smith (D-Wash.) said, “If confirmed, Ms. Jones would be the first woman of color to serve as Under Secretary of the Air Force, marking yet another historic nomination as the Biden-Harris administration continues to prove their commitment to building a diverse Department of Defense that reflects the American population."