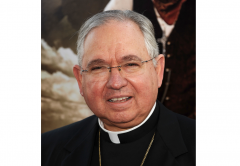 (CNS News) -- Although the liberal media describe President Joe Biden (D) as a "devout Catholic," the U.S. Conference of Catholic Bishops (USCCB) is very familiar with his pro-abortion, pro-LGBT agenda and says Biden supports policies "that would advance moral evils and threaten human life and dignity...."

In a statement released on Jan. 20, USCCB President Archbishop Jose Gomez of Los Angeles, said, "[A]s pastors, the nation’s bishops are given the duty of proclaiming the Gospel in all its truth and power, in season and out of season, even when that teaching is inconvenient or when the Gospel’s truths run contrary to the directions of the wider society and culture."

The Catholic Joe Biden speaks at a Planned Parenthood fundraiser in 2020. (Getty Images)

"So, I must point out that our new President has pledged to pursue certain policies that would advance moral evils and threaten human life and dignity, most seriously in the areas of abortion, contraception, marriage, and gender," said the archbishop. "Of deep concern is the liberty of the Church and the freedom of believers to live according to their consciences."

President Joe Biden and Vice President Kamala Harris support abortion on demand. They also support "gay marriage," gay adoption, gender theory, and a variety of other practices that are contrary to the moral teachings of the Catholic Church.

"For the nation’s bishops, the continued injustice of abortion remains the 'preeminent priority,'" said Archbishop Gomez.  "Preeminent does not mean 'only.' We have deep concerns about many threats to human life and dignity in our society. But as Pope Francis teaches, we cannot stay silent when nearly a million unborn lives are being cast aside in our country year after year through abortion."

"Abortion is a direct attack on life that also wounds the woman and undermines the family," he wrote. "It is not only a private matter, it raises troubling and fundamental questions of fraternity, solidarity, and inclusion in the human community."

"It is also a matter of social justice," said Gomez. "We cannot ignore the reality that abortion rates are much higher among the poor and minorities, and that the procedure is regularly used to eliminate children who would be born with disabilities."

The archbishop continued, "Rather than impose further expansions of abortion and contraception, as he has promised, I am hopeful that the new President and his administration will work with the Church and others of good will."

Archbishop Gomez also called on President Biden to work with the bishops to help put in place "a coherent family policy in this country" that emphasizes the "crucial importance of strong marriages and parenting."

In concluding his statement, the archbishop wrote, "We are all under the watchful eye of God, who alone knows and can judge the intentions of our hearts. I pray that God will give our new President, and all of us, the grace to seek the common good with all sincerity."

in its June 2020 campaign endorsement of Joe Biden, the Planned Parenthood Action Fund said, "Biden has committed to champion access to sexual and reproductive health care — including access to abortion — and to fight for our communities. When he left the Senate, Vice President Joe Biden had a 100% voting record from Planned Parenthood Action Fund, and has been clear he is ‘100% for sexual and reproductive health.’ And we are going to hold him to that."

In its latest annual report, Planned Parenthood disclosed that it had preformed  345,672 abortions (for the reporting period Oct. 1, 2017-Sept. 30, 2018). Also, the report shows that for the year that ended June 30, 2019, Planned Parenthood received $616.8 million in government health services, reimbursements & grants.

Since 1973, according to data from the CDC and the Guttmacher Institute, more than 62 million Americans have been killed by abortion.

On his campaign website, it states, "As president, Biden will work to codify Roe v. Wade, and his Justice Department will do everything in its power to stop the rash of state laws that so blatantly violate the constitutional right to an abortion, such as so-called TRAP laws [or targeted restrictions on abortion providers], parental notification requirements, mandatory waiting periods, and ultrasound requirements."