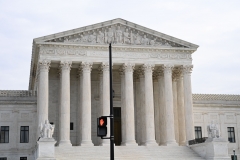 The House Judiciary Committee, headed by Nadler, said in a press release, "This bill would restore balance to the nation’s highest court after four years of norm-breaking actions by Republicans led to its current composition and greatly damaged the Court’s standing in the eyes of the American people."

"In order for the Court to fulfill its duty to deliver equal justice under the law, and protect the rights and well-being of millions of Americans, the legislation expands the Court to restore balance, integrity and independence to it," states the release.

“Nine justices may have made sense in the nineteenth century when there were only nine circuits, and many of our most important federal laws—covering everything from civil rights, to antitrust, the internet, financial regulation, health care, immigration, and white collar crime—simply did not exist, and did not require adjudication by the Supreme Court,” said Chairman Nadler.

“But the logic behind having only nine justices is much weaker today, when there are 13 circuits," he added. "Thirteen justices for thirteen circuits is a sensible progression, and I am pleased to join my colleagues in introducing the Judiciary Act of 2021.”

“Republicans stole the Court’s majority, with Justice Amy Coney Barrett’s confirmation completing their crime spree,” said Senator Markey. “Of all the damage Donald Trump did to our Constitution, this stands as one of his greatest travesties."

"Senate Republicans have politicized the Supreme Court, undermined its legitimacy, and threatened the rights of millions of Americans, especially people of color, women, and our immigrant communities," said Markey. "This legislation will restore the Court’s balance and public standing and begin to repair the damage done to our judiciary and democracy, and we should abolish the filibuster to ensure we can pass it."

In his career in the Senate, Joe Biden denounced the idea of packing the court, which President Franklin Roosevelt tried to do,  stating it was "a bone head idea, it was a terrible, terrible mistake."

Former liberal Supreme Court Justice Ruth Bader Ginsburg also rejected the idea of packing the court. As she told NPR in 2019, "it was a bad idea when President Franklin Roosevelt tried to pack the court."

"If anything would make the court look partisan, it would be that," said Ginsburg, "one side saying, 'When we're in power, we're going to enlarge the number of judges, so we would have more people who would vote the way we want them to.'"

"So, I am not at all in favor of that solution," said Justice Ginsburg.

Last week, President Biden announced the creation of a commission to examine the U.S. Supreme Court and to make recommendations, including expanding the court with more justices.

In reaction to the Democrats' plan, the Judicial Crisis Network (JCN) launched a new campaign opposing the court-packing legislation "and reminding Americans that Joe Biden opposed court packing for decades until liberal dark money groups spent over a hundred million dollars to elect him," stated the organization in a press release.

"For decades, Joe Biden stood firmly against court packing," said JCN President Carrie Severino.  "But now the left-wing dark money groups who elected him and Senate Democrats are demanding it, and Biden is changing his tune."

The ad states that the Biden campaign received $145 million in liberal dark money, as was reported by Bloomberg News back in January.