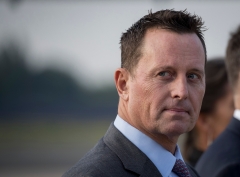 (CNS News) -- In a video distributed by the Log Cabin Republicans, former Acting Director of National Intelligence Richard Grenell states that Trump is the "most pro-gay president in American history." In a Twitter response to the video, Trump declared, "My great honor!!!"

Grenell, who is gay, served as the U.S. ambassador to Germany (2018-20) and as Acting Director of National Intelligence (2/20/20 - 5/26/20) under President Trump.  The Log Cabin Republicans "is the nation’s largest Republican organization dedicated to representing LGBT conservatives and allies," according to its website.

In the video, Grenell, among other things, states, "President Trump is the most pro-gay president in American history. I can prove it. My name is Ric Grenell. I'm America's first openly gay Cabinet member. As a United States senator, Joe Biden said gay people couldn't receive security clearances because we would be a security risk.

"Joe must have been terrified when Donald Trump appointed me as Acting Director of National Intelligence. The fact that I'm gay didn't even faze Donald Trump....

"I know firsthand that President Trump is the strongest ally that gay Americans have ever had in the White House. Donald Trump is the first president in American history to be pro-gay marriage from his first day in office. ..."

In response to the video in an Aug. 20 re-tweet, President Trump said, "My great honor!!!"

Joe Biden (D-Del.) made the remark about gays being security risks in 1973 -- 47 years ago -- in response to a reporter's question. "My gut reaction," said Biden, "is that they [homosexuals] are security risks, but I must admit I haven't given this much thought. ... I’ll be darned!’”

Since that time, Biden's views on homosexuality have "evolved."  Today, he supports the LGBT agenda and even officiated at a gay "wedding" at his home in August 2016.

Biden's support (and votes) for homosexual behavior and so-called gay marriage are in direct conflict with the teachings of the Catholic Church, of which he is a member.

Contrary to the homosexual inclination, the Church teaches that homosexual acts are always wrong and gravely sinful.  As the Catechism of the Catholic Church states, "Homosexuality refers to relations between men or between women who experience an exclusive or predominant sexual attraction toward persons of the same sex. It has taken a great variety of forms through the centuries and in different cultures. Its psychological genesis remains largely unexplained.

"Basing itself on Sacred Scripture, which presents homosexual acts as acts of grave depravity, tradition has always declared that 'homosexual acts are intrinsically disordered.' They are contrary to the natural law. They close the sexual act to the gift of life. They do not proceed from a genuine affective and sexual complementarity. Under no circumstances can they be approved."

Grenell was raised in an Evangelical Christian home.  He believes he was born gay. "I fully embrace that I was made this way in the image of God and you can be gay and be a Christian," he told The Advocate in March 2020.  "I am an imperfect follower of Christ."