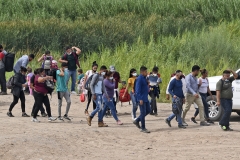 (CNS News) -- Two non-profit organizations, CatholicVote and Judicial Watch, recently filed a Freedom of Information Act lawsuit against the Department of Homeland Security (DHS) and the Department of Health and Human Services (HHS) because they failed to provide requested information about their communications with Catholic-affiliated agencies at the border and the agencies' alleged role in the surge of illegal immigrants over the last year.

"The Biden administration has refused to provide copies of communications between Catholic-affiliated charities and organizations at the border," said CatholicVote President Brian Burch in a statement.  "Their lack of transparency and obstruction forced us to file these federal lawsuits."

"American Catholics deserve to know the full extent of the U.S. government's role in funding and coordinating with Catholic Church-affiliated agencies at the border, and what role these agencies played in the record surge of illegal immigrants over the past year," said Burch.

"We will do whatever is necessary to uncover the truth," he added.

The lawsuit was filed with the U.S. District Court for the District of Columbia on Feb. 4.

The initial FOIA request, permissible by law, was sent to the Customs and Border Protection (a component of the DHS) and the HHS on Sept. 21, 2021. Both CatholicVote and Judicial Watch were seeking the following information for the time period Jan. 1, 2021 -- Sept. 1, 2021:

"All communications between the U.S. Customs and Border Patrol and any of the following:

That same day, Sept. 1, 2021, CatholicVote and Judicial Watch sent a FOIA request for all communications "between the U.S. Customs and Border Patrol and the U.S. Conference of Catholic Bishops regarding the following:

The lawsuit is requesting that the court order the DHS and the HHS to comply with the FOIA requests and pay attorneys’ fees and other litigation costs.

According to its website, "Judicial Watch, Inc. is a conservative, non-partisan educational foundation, which promotes transparency, accountability and integrity in government, politics and the law. ... Judicial Watch fulfills its educational mission through litigation, investigations, and public outreach."

CatholicVote's mission, according to its website, is "to inspire every Catholic in America to live out the truths of our faith in public life."   The organization is "a national faith-based advocacy organization, organized by faithful Catholic laity in full communion with the teachings of the Church, yet does not claim to speak for any individual bishop or the United States Conference of Catholic Bishops."