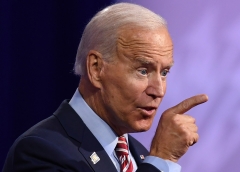 (CNS News) -- The National LGBT Chamber of Commerce (NGLCC), the business voice of the homosexual, bisexual, and transgender community, endorsed Democrat Joe Biden for president today, stating that he is a "champion for inclusion."

This is the second time in its 20-year history that the gay organization has endorsed a presidential candidate.

“The NGLCC is proud to endorse a champion for inclusion," said NGLCC Co-Founder and President Justin Nelson. "We need to elect a president with a commitment to LGBTQ equality, ending racism and racial violence, promoting small businesses and entrepreneurship, and ensuring a safe and equitable society for every American."

"Joe Biden is that candidate,” said Nelson. "Joe Biden proudly affirms an essential core value of the NGLCC: that we all deserve our shot at the American Dream, and that our economy only succeeds when it is available to all LGBT and allied Americans.”

In a statement, the NGLCC went on to say, "Vice President Biden has denounced LGBT discrimination as not only immoral but fundamentally bad for business in his long career. NGLCC leadership considers his election imperative to the well-being of America’s economy and the monumental gains achieved in recent years for the LGBT community...."

The group also said that Biden would preserve and expand "President Obama’s LGBT equality executive actions," particularly as they relate to  "LGBT businesses seeking contracts and economic opportunities with Fortune 500 corporations" and "in state and municipal contracting...."

"Joe Biden is the champion our businesses and our families need to thrive,” said NGLCC Co-Founder and CEO Chance Mitchell. “The LGBT community has come too far to lose its seat at the table, and we are certain that a President Biden will continue fighting for the collective economic and social longevity of America’s 1.4 million LGBT business owners and the more than $1.7 trillion they add to the US economy despite ongoing discrimination.”

Among Biden's pro-homosexual policies, his campaign website states that in his administration transgender students will have full access to the bathrooms, locker rooms, and sport teams that align with their gender identity.

Marcher participates in the Queer Liberation March for Black Lives & Against Police Brutality in Washington Square Park on June 28, 2020. Due to the ongoing Coronavirus pandemic, this year's march had to be canceled over health concerns. The annual event, which sees millions of attendees, marks it's 50th anniversary since the first march following the Stonewall Inn riots. (Photo by John Lamparski/Getty Images)

Biden would mandate that biological males who identify as females would be allowed to compete in real women's sports and use facilities created for real females.

In “The Biden Plan to Advance LGBTQ+ Equality in America and Around the World,” it says, “On his first day in office, Biden will reinstate the Obama-Biden guidance revoked by the Trump-Pence Administration, which will restore transgender students’ access to sports, bathrooms, and locker rooms in accordance with their gender identity. He will direct his Department of Education to vigorously enforce and investigate violations of transgender students’ civil rights.”

Biden, a pro-LGBT Catholic, officiated a gay "marriage" at his home in 2016.