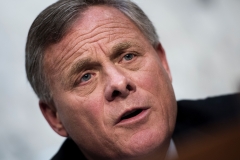 (CNS News) -- The Central Committee of the North Carolina Republican Party voted to censure Sen. Richard Burr because he voted to impeach former President Donald Trump, the committee said in a statement released on Feb. 15.

"Tonight, the North Carolina Republican Party Central Committee voted unanimously to censure Senator Richard Burr for his vote to convict former President Trump in the impeachment trial which he declared to be unconstitutional," reads the statement.

"The NCGOP agrees with the strong majority of Republicans in both the U.S. House of Representatives and Senate that the Democrat-led attempt to impeach a former President lies outside the United States Constitution," said the committee.

"Now that the Senate has voted to acquit President Trump, we hope that Democrats will set aside their divisive partisan agenda and focus on the American priorities of tackling the COVID-19 pandemic, safely reopening schools and restarting the economy," the statement concluded.

Trump was acquitted by the Senate on Feb. 13. Although the vote was 57-43 in favor of conviction, it was 10 votes short of the two-thirds needed to convict.

In a statement about his vote to convict Trump, Sen. Burr said, “When this process started, I believed that it was unconstitutional to impeach a president who was no longer in office. I still believe that to be the case. However, the Senate is an institution based on precedent, and given that the majority in the Senate voted to proceed with this trial, the question of constitutionality is now established precedent. As an impartial juror, my role is now to determine whether House managers have sufficiently made the case for the article of impeachment against President Trump.

“I have listened to the arguments presented by both sides and considered the facts. The facts are clear.

“The President promoted unfounded conspiracy theories to cast doubt on the integrity of a free and fair election because he did not like the results. As Congress met to certify the election results, the President directed his supporters to go to the Capitol to disrupt the lawful proceedings required by the Constitution. When the crowd became violent, the President used his office to first inflame the situation instead of immediately calling for an end to the assault.

“As I said on January 6th, the President bears responsibility for these tragic events. The evidence is compelling that President Trump is guilty of inciting an insurrection against a coequal branch of government and that the charge rises to the level of high Crimes and Misdemeanors. Therefore, I have voted to convict."

In response to being censure by his own party, Burr said, "My party's leadership has chosen loyalty to one man over the core principles of the Republican Party and the founders of our great nation."