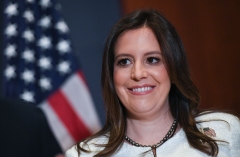 (CNS News) -- Although Republicans in the House of Representatives voted to oust Rep. Liz Cheney (R-Wy.) from the GOP's No. 3 leadership post and replace her with Rep. Elise Stefanik (R-N.Y.), the ratings of Congress members by the American Conservative Union (ACU) show that Cheney held a 78% conservative rating in 2020 and Stefanik held a 44% rating.

In addition, the ACU ratings show several GOP women in the House hold far higher conservative ratings than both Stefanik and Cheney.

The ACU ratings, which are made by the organization's Center for Legislative Accountability, were started in 1971 and are considered the "gold standard" in showing how closely a lawmaker adheres to conservative principles.

"Each lawmaker is evaluated on a zero to 100 scale, with a score of 100 representing a voting record that is perfectly aligned with conservative principles," states the ACU. "[A]ny lawmaker who earns a score of 10% or lower qualifies for the ACU's Coalition of the Radical Left."

In other words, Cheney adhered to conservative principles with her votes 78% of the time.

Stefanik stuck to conservative principles with her votes only 44% of the time.