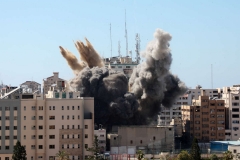 Before the May 15 airstrike against the building in Gaza, Israeli military officials contacted AP and told them they had one hour to get out of the building. No civilians were killed or injured in the airstrike.

“The AP’s top newsman said he was shocked and horrified by an airstrike that caused no casualties," said Sen. Cotton in a Senate floor speech today. "He also disclaimed any knowledge of Hamas’s presence in the building despite actively checking. And the other journalists and their advocacy organizations mounted up on their moral high horses against Israel."

“But the AP story just didn’t add up," said Cotton. "So I asked a few basic questions right here, yesterday afternoon – namely, why was the Associated Press sharing a building with Hamas, in the first place?  Did it normally allow its journalists to be used as human shields by a U.S.-designated terrorist organization?"

He continued, “Did the AP pull its punches and decline to report for years about Hamas’s misdeeds? One would think these are simple and reasonable questions. But I directed them to a media organization."

"So, the usual suspects circled the wagons," said Cotton, "expressing more outrage at my audacity to question the AP’s leadership than they do at Hamas for trying to kill Jews by the thousands."

“Keith Olbermann called me anti-Constitution, anti-free press, racist, fascist," added Cotton.  "One Slate reporter said I was making deranged insinuations and going to bat against civilians in a war zone, even though no civilians had been harmed in this air strike."

"The constant refrain of their criticism is that I was attacking the brave reporters of the Associated Press, Gaza Bureau," said the senator.  "My claims were baseless, reckless, without evidence, they claimed."

“But there is plenty of evidence that some media outlets stationed in Gaza allow themselves to be used as pawns by Hamas," said Cotton.

According to a 2014 article in The Atlantic, cited by Cotton, "Hamas fighters burst into the AP's Gaza Bureau during the previous conflict and threatened the staff. Hamas also launched missiles right outside the AP's office."

"In each case, somehow, the intrepid reporters of the Associated Press' Gaza Bureau didn't even report on these incidents," said Cotton. "The AP instead turned a blind eye to terrorism an embraced a culture of silence on behalf of murderers who actively endangered its own reporters and staff."

What's equally scandalous is the AP continued to locate their offices in a building they knew was dangerous," said the senator. "They had been in that building for 15 years.... In 15 years, did no one every say, 'Gosh, I wonder why Hamas keeps running around our office building?'"