Sen. Kennedy to Biden Nominee: 'You're the Only Person in the Milky Way Who Believes You're Impartial' 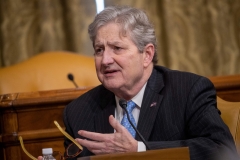 When repeatedly asked under oath before the Senate Judiciary Committee this week whether she believed Kavanaugh was "morally bankrupt," Sung declined to answer directly, and claimed the letter's rhetoric was overheated.

In the July 10, 2018 letter, signed by Sung, Yale Law School students, and alumni, it partly said, "We see in these rulings [by Kavanaugh] an intellectually and morally bankrupt ideologue intent on rolling back our rights.... [P]eople will die if he is confirmed."

During Sung's confirmation hearing on Sept. 14 before the Senate Judiciary Committee, Sen. John Kennedy (R-La.) asked her, "Counsel, did you really say that Justice Kavanaugh was a morally bankrupt person?"

Sung replied, 'Senator, as I explained, I did not write that letter, I did sign it."

Sung: "I read it quickly and I signed it."

Kennedy: "You signed it?"

Kennedy:  "Did you really say that if Justice Kavanaugh were confirmed, he would cause people to die?"

Kennedy: "But you said it, right?"

Kennedy then asked Sung, 'Do you believe that Brett Kavanaugh is a morally bankrupt person?"

Sung did not answer, but said, "Senator, sitting here as a judicial nominee, it is not appropriate for me to comment--."

Kennedy interjected, "You said it, you said it, that he's a morally bankrupt person."

Sung, again, did not answer directly but said, "Senator, it is not appropriate for me--"

"Why not, you said it," interjected Kennedy.

"You're not going to answer my question," said Kennedy.

Sung then replied, "I believe I've answered it to the best of my ability."

Kennedy countered, "This is really simple. You said, Brett Kavanaugh is a morally bankrupt person.  It's as clear as thunder on a summer night. Now, you're under oath. Do you believe he is or not?  How hard is that?  You'll have much harder questions as a federal judge, if you make it that far."

Evading the question again, Sung said, "I appreciate the question senator. As I stated, those statements were rhetorical advocacy."

The back and forth continued for another six minutes.  Towards the end of the exchange, Sung claimed, I have applied the law impartially," to which Kennedy retorted, "You're the only person in the Milky Way that believes you are impartial."

Sung, 49. earned a B.A. from Oberlin College in 1994 and a J.D from Yale Law School in 2004. She was nominated for the 9th Circuit Court of Appeals, arguably the most left-wing circuit, by President Biden on June 30, 2021.  Her nomination is still pending in the Senate Judiciary Committee.