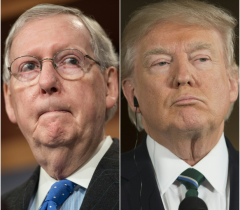 (CNS News) -- Former President Donald Trump, whose support among Republicans has increased since his impeachment acquittal on Feb. 13, issued a statement on Tuesday sharply critical of Senate Minority Leader Mitch McConnell (R-Ky.), describing him as an "unsmiling political hack" who  "doesn't have what it takes, never did, and never will."

As president, Trump supported and endorsed McConnell for reelection in the 2020 race, which apparently was helpful to the McConnell campaign. Despite that support, after the Jan. 6 riot at the U.S. Capitol, McConnell said Trump was derelict in his duty and was "practically and morally responsible for provoking the events of that day."

In his Feb. 16 statement, Trump said, "The Republican Party can never again be respected or strong with political 'leaders' like Sen. Mitch McConnell at its helm. McConnell’s dedication to business as usual, status quo policies, together with his lack of political insight, wisdom, skill, and personality, has rapidly driven him from Majority Leader to Minority Leader, and it will only get worse.

"The Democrats and Chuck Schumer play McConnell like a fiddle—they’ve never had it so good—and they want to keep it that way! We know our America First agenda is a winner, not McConnell’s Beltway First agenda or Biden’s America Last."

"... My only regret is that McConnell 'begged' for my strong support and endorsement before the great people of Kentucky in the 2020 election, and I gave it to him," said Trump. "He went from one point down to 20 points up, and won. How quickly he forgets. Without my endorsement, McConnell would have lost, and lost badly. Now, his numbers are lower than ever before, he is destroying the Republican side of the Senate, and in so doing, seriously hurting our Country."

"Mitch is a dour, sullen, and unsmiling political hack, and if Republican Senators are going to stay with him, they will not win again," said Trump. "He will never do what needs to be done, or what is right for our Country. Where necessary and appropriate, I will back primary rivals who espouse Making America Great Again and our policy of America First. We want brilliant, strong, thoughtful, and compassionate leadership."

McConnell, in his Feb. 13 statement about the Jan. 6 attack on the Capitol, said, "January 6th was a disgrace. ... Fellow Americans beat and bloodied our own police. They stormed the Senate floor. They tried to hunt down the Speaker of the House. They built a gallows and chanted about murdering the vice president."

“They did this because they had been fed wild falsehoods by the most powerful man on Earth — because he was angry he’d lost an election," said McConnell in reference to Trump.

"There is no question that President Trump is practically and morally responsible for provoking the events of that day," said McConnell. “The people who stormed this building believed they were acting on the wishes and instructions of their president."

“And their having that belief was a foreseeable consequence of the growing crescendo of false statements, conspiracy theories, and reckless hyperbole which the defeated president kept shouting into the largest megaphone on planet Earth," said McConnell.

Despite his tough remarks, McConnell voted to acquit President Trump on the one impeachment charge of inciting an insurrection.  McConnell said, "By the strict criminal standard, the president’s speech probably was not incitement." However, McConnell added that the impeachment made no sense because Trump "is no longer the president."

Article II, Section 4 of the Constitution states, “The President, Vice President and all civil Officers of the United States, shall be removed from Office on Impeachment for, and Conviction of, Treason, Bribery, or other high Crimes and Misdemeanors.” (Emphasis added.)