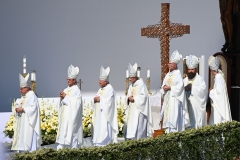 (CNS News) -- In a letter to all 100 senators, the U.S. Conference of Catholic Bishops (USCCB) urged them to oppose the Women's Health Protection Act (WHPA), which would legalize abortion on demand nationwide and prohibit nearly all restrictions on the procedure.

The letter stresses that the WHPA, which is being pushed by Democrats, is at odds with the "rights of the human person," and "would catapult our nation further away from this greatness by legislatively enshrining the killing of defenseless, voiceless human beings."

Cardinal Timothy Dolan, chairman of the Committee for Religious Liberty at the U.S. Conference of Catholic Bishops. (Getty Images)

"This deceptively-named, extreme bill would impose abortion on demand nationwide at any stage of pregnancy through federal statute," they wrote.  "Even worse, it would eliminate modest and widely supported pro-life laws at every level of government -- the federal, state, and local level -- including parental notification for minor girls, informed consent, and health or safety protections specific to abortion facilities."

"It would force all Americans to support abortions here and abroad with their tax dollars," state the archbishops. "It would also likely force health care providers and professionals to perform, assist in, and/or refer for abortion against their deeply-held beliefs, as well as force employers and insurers to cover or pay for abortion."

The legislation is now up for a vote in the Senate, perhaps as early as Monday, Feb. 28,  and is being strongly pushed by Senate Majority Leader Chuck Schumer (D-N.Y.).

At a press conference on Thursday outside the Capitol, surrounded by pro-abortion activists, Schumer said, “We are here today as a united front on the issue of women’s rights, their protection and their health."

“We are in the midst of a downright dangerous domino-effect attack on women’s reproductive rights," he said. "We are here because we can and we must assert the federal government’s role to protect the constitutional right to abortion. I am announcing that the Senate will vote on the critical WHPA.”

“We are here to throw cold water on the flames of anti-women bigotry and affirm five sacred words: Abortion is a fundamental right," he added.

The legislation states that "access to abortion services is critical to the health of every person capable of becoming pregnant. This Act is intended to protect all people with the capacity for pregnancy -- cisgender women, transgender men, non-binary individuals, those who identify with a different gender, and others -- who are unjustly harmed by restrictions on abortion services."

However, "abortion is the opposite of women’s health care, and is an extreme violation of human rights," wrote the archbishops.

"Answering the needs of women by promoting taxpayer-funded elective abortion, as this bill would do, is a failure to love and serve women," they said. "Offering free or low-cost abortions, instead of the resources needed to care for her child, is not 'choice' but coercion. It communicates to a mother in need that there is no hope for her or her child and perpetuates injustices that drive mothers to end the lives of their children."

"As a nation built on the recognition that every human being is endowed by its Creator with the unalienable rights to life, liberty and the pursuit of happiness, we must reject this bill and embrace public policy that fully respects and facilitates these rights and needs of both mother and child," reads the letter.

In conclusion, they wrote, "In its assumption that abortion can be the only, or best, solution to a crisis pregnancy, the Women’s Health Protection Act is built on a false and despairing narrative. In treating abortion as the moral equivalent to the removal of an appendix, this proposal is radically out of step with the American public."

Democrats control the U.S. Senate, which is split 50-50, because any tie votes can be decided by Vice President Kamala Harris, a Democrat.