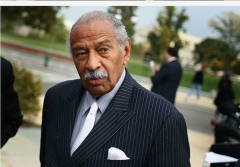 If the player does not load, please check that you are running the latest version of Adobe Flash Player.

Conyers said: “Under several clauses, the good and welfare clause and a couple others. All the scholars, the constitutional scholars that I know -- I’m chairman of the Judiciary committee, as you know -- they all say that there’s nothing unconstitutional in this bill and if there were, I would have tried to correct it if I thought there were.”

The word "good" only appears once in the Constitution, in Article 3, Section 1, which deals with the Judicial Branch, not the powers of Congress. Article 3, Section 1 says in part: "The Judges, both of the supreme and inferior Courts, shall hold their Offices during good Behavior, and shall, at stated Times, receive for their Services a Compensation which shall not be diminished during their Continuance in Office."
The Senate health care bill that was passed by the House of Representatives on March 21 mandates that all Americans carry health insurance. If they do not,  individuals and most businesses will be penalized, with the fees collected by the Internal Revenue Service.

According to the Congressional Budget Office (CBO), however, the federal government has never before mandated that Americans buy any good or service. In 1994, when Congress was considering a universal health care plan formulated by then-First Lady Hillary Clinton, the CBO studied the plan’s provision that would have forced individuals to buy health insurance and determined it was an unprecedented act.

The CBO stated: “A mandate requiring all individuals to purchase health insurance would be an unprecedented form of federal action. The government has never required people to buy any good or service as a condition of lawful residence in the United States. An individual mandate would have two features that, in combination, would make it unique. First, it would impose a duty on individuals as members of society. Second, it would require people to purchase a specific service that would be heavily regulated by the federal government.”