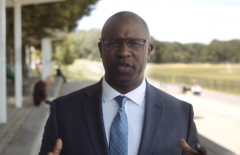 Leftist candidate Jamaal Bowman says he "can’t wait to get to DC and cause problems for those maintaining the status quo.” (Photo: Screen capture/Bowman for Congress campaign website)

(CNSNews.com) – Two years after Alexandria Ocasio-Cortez defeated a 10-term incumbent in a New York House Democrat primary, a left-wing candidate endorsed by the high-profile “squad” member looks set to repeat the accomplishment, with the loser this time a 16-term veteran backed by the party establishment.

In New York’s 16th congressional district, Jamaal Bowman, an African American former middle school principal backed by the Justice Democrats – as were all four squad members in 2018 – has declared victory over Rep. Eliot Engel, the 73-year-old chairman of the House Foreign Affairs Committee and a member of Congress since 1989.

Mail-in ballots have yet to be tallied, but Bowman, 44, leads Engel by a 29-point margin with 99 percent of in-person votes counted.

Endorsements in the closely-watched race reflected divisions in the Democratic Party.

"The Young Turks" host John Iadarola recalled Ocasio-Cortez’ insurgent campaign to unseat incumbent Rep. Joe Crowley in 2018, and suggested another party establishment figure should be next to go, tweeting:

“I’m a Black man raised by a single mother in a housing project,” Bowman tweeted on Wednesday. “That story doesn’t usually end in Congress. But today, that 11-year old boy beaten by police is about to be your Representative. I can’t wait to get to DC and cause problems for those maintaining the status quo.”

Bowman while campaigning characterized Engel as an out-of-touch, largely “absent” member of Congress, and one who unlike him was willing to accept donations from corporations including defense contractors. 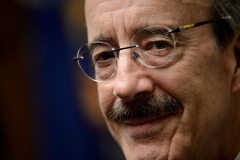 Engel ticks many of the liberal Democrat boxes, as his campaign’s Twitter feed made sure voters were reminded of on primary day, highlighting his 100 percent ratings from Planned Parenthood and NARAL Pro-Choice America, endorsements from the Sierra Club, Stonewall Democrats, New York AFL-CIO, among others, and his “F” rating from the NRA.

He also played a leading role in the impeachment of President Trump, a point underlined by Intelligence Committee chair Adam Schiff in his endorsement of Engel.

But his foreign policy stance puts him at odds with progressive activists: Engel voted in favor of the Iraq War, was the most prominent of a handful of House Democrats to oppose the Obama administration’s Iran nuclear deal, and is viewed as one of the most pro-Israel voices in the Democratic caucus.

He has sponsored numerous pieces of pro-Israel legislation, including a measure opposing the anti-Israel boycott, divestment and sanctions (BDS) movement, and he praised President Trump’s decision to recognize Jerusalem as Israel’s capital.

He also criticized the outgoing Obama administration’s decision in December 2016 to abstain rather than veto a U.N. Security Council resolution describing areas including the location in Jerusalem of the holiest site in Judaism as “occupied Palestinian territory.”

Omar, a supporter of the BDS movement, was then appointed to the Foreign Affairs Committee, chaired by Engel. Last July Omar, Ocasio-Cortez and Squad member Rep. Rashida Tlaib (D-Mich.) all voted against an anti-BDS measure championed by Engel, which passed with a large bipartisan majority.

While campaigning against Engel, Bowman criticized him for his Iraq war vote and his opposition to the Iran nuclear deal.

His stated position on the Israel-Palestinian issue has been more nuanced. Bowman says he supports a two-state solution to the conflict with both peoples living in peace and security. In contrast to some progressive lawmakers, he says he backs continued U.S. aid to Israel and does not personally support the BDS campaign.

In recent newspaper correspondence with a rabbi, on the other hand, Bowman linked the experience of blacks fearful of police in America with life “under occupation” in the Middle East.

“Just as the police force is a violent intimidating force in so many black communities, I can connect to what it feels like for Palestinians to feel the presence of the military in their daily lives in the West Bank,” he wrote.

Meanwhile Ocasio-Cortez easily won her primary in the 14th district, winning around 70 percent against a centrist challenger.

Two other New York primaries look likely to be won by candidates who, if successful, would become the first two openly gay black men in Congress. They are Mondaire Jones, a former Obama administration Justice Department official, in the 17th district, where he is 23 points ahead of his nearest rival; and New York City Council member Ritchie Torres in the 15th district, with an 11-point lead over the second-placed contender.

Jones, Torres, Bowman, and Ocasio-Cortez were all endorsed by the New York Times editorial board.