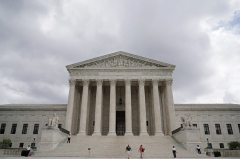 (CNSNews.com) – Democratic presidential nominee Joe Biden said on Thursday night that he will make public his position on increasing the size of the Supreme Court before Election Day, indicating that it would depend on how the rest of Judge Amy Coney Barrett’s confirmation process is “handled.”

Americans will know his position on the issue “before they vote,” he said during an ABC News townhall in Pennsylvania.

One of the main reasons given by the Democrats for opposing Trump’s nomination of Barrett, however, is that the election is already underway, with millions having already cast their ballots.

Just minutes earlier, Biden made that point again, saying that when “millions of people have already voted, to put someone on the court” was in his view inconsistent with the Constitution. (According to the U.S. Elections Project, more than 18.6 million ballots have been cast as of Thursday night.)

Since President Trump last month announced his intention to nominate a judge following the death of Justice Ruth Bader Ginsberg, Biden has refused to tell voters whether or not he has changed his opposition to “packing the court.” (In 1983 he called proposals to do so “a bonehead idea.”)

“You’ll know my opinion on court-packing when the election’s over,” he said last week.

In recent days Biden has said he was “not a fan” of the idea, a position he repeated on Thursday night.

“I’m not a fan, I didn’t say – it depends on how this turns out. Not how he wins, but how it’s handled,” he told ABC News’ George Stephanopoulos.

Asked what he meant by “how it’s handled,” Biden suggested that if the U.S. Senate rushed through a vote on confirming Barrett, that would be a problem for him.

“For example, if there’s actually real live debate on the floor, if people are really going to be able to have time to go through this. You know, I don’t know anybody who’s gone on the floor and jus – and, you know, that’s been a controversial justice in terms of making, fundamentally altering the makeup of the court, that’s gone through in a day, kind of thing.”

“I mean, it depends on how much they rush this,” he said.

Biden then complained that Senate Republicans had time to “rush” Barrett’s nomination through but not to deal with the economic consequences of the COVID-19 pandemic.

Stephanopoulos said it seemed the Senate would hold a vote on the nomination around Halloween.

“If they vote on it before the election, you are open to expanding the court?” he asked.

“I’m open to considering what happens from that point on,” Biden replied.

Stephanopoulos said Biden has long said that it’s important to level with the American people.

Biden agreed that it was, but repeated his line that if he gave a clear answer, news headlines would focus on that rather than on “what’s going on now – the improper way they’re proceeding.”

“But don’t voters have a right to know where you stand?”

“So you’ll come out with a clear position before Election Day?” Stephanopoulos asked.

“Yes,” Biden said. “Depending on how they handle this.”

After three days of hearings this week, the Senate Judiciary Committee is expected to hold a vote on Barrett’s nomination on October 22, ahead of a full Senate vote.

“We’ll go to the floor with her on Friday the 23rd and stay on it until we finish,” Senate Majority Leader Mitch McConnell told reporters on Thursday, expressing confidence that “we have the votes” to confirm.