BLM Activist Heading to Congress Calls for 'End to US Imperialism’ 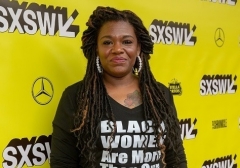 (CNSNews.com) – Allies of “Squad” member Rep. Rashida Tlaib (D-Mich.) are awaiting the result of her closely-watched primary but in the meantime are celebrating a progressive win in Missouri, where a Black Lives Matter activist has toppled a ten-term incumbent.

In Missouri’s overwhelmingly Democrat 1st congressional district, which includes St. Louis, Cori Bush defeated Rep. Lacy Clay in a rematch after she lost to him by 20 points in a 2018 primary.

During her 2020 campaign Bush received endorsements from Sen. Bernie Sanders (I-Vt.) – she had campaigned for him during his presidential run – as well as Justice Democrats and Democratic Socialists of America among others. Clay lost despite having been endorsed earlier by the Congressional Progressive Caucus.

“Congratulations to Cori Bush on her primary victory tonight!” tweeted Sanders. “She is a true progressive who stands with working people and will take on the corporate elite of this country when she gets to Congress.”

Sarsour also retweeted a post quoting from a recent Cori Bush statement confirming that the candidate “has always been sympathetic to the BDS movement” – the anti-Israel boycott, divestment and sanction campaign, which counts among its supporters in Congress Tlaib and Rep. Ilhan Omar (D-Minn.).

In a recent video message to Muslims, Bush pledged to oppose what critics label President Trump’s “Muslim ban,” and called for “an end to U.S. imperialism, endless wars and policies of destabilization in the Middle East and in Muslim-majority countries.”

Bush said that “not only are we standing up for black lives, but for oppressed people everywhere, be they Palestinian, Afghani, Somali, Pakistani, Yemeni, Syrian, or Jewish, both here at home and abroad.”

The majority African American district, which includes Detroit and some of its suburbs, was represented by Rep. John Conyers Jr. until he resigned in 2017. (Conyers died last year.)

Like fellow “Squad” member Omar, who faces her own primary challenge in Minnesota next Tuesday, Tlaib has been confronted by a rival who portrayed her as being divisive and more focused on “celebrity” than on the needs of her constituents.