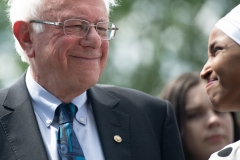 Rep. Ilhan Omar campaigned for Sen. Bernie Sanders during his now-suspended presidential bid, and Sanders endorsed Omar in her district primary on Tuesday. (Photo by Saul Loeb/AFP via Getty Images)

(CNSNews.com) – Rep. Ilhan Omar of Minnesota easily won her Democratic primary on Tuesday, setting her and the rest of the so-called “Squad” of left-wing congresswomen on track to return to Congress next year in their respective solidly Democratic districts.

By a margin of 57.4 to 39.1 percent, Omar defeated Antone Melton-Meaux, a black Minneapolis lawyer and “progressive, lifelong Democrat” who during the campaign portrayed her as being more focused on her national profile than the needs of Minnesota’s 5th congressional district. (Three other candidates took less than four percent between them.)

Omar was endorsed both by progressive former presidential candidates Sens. Bernie Sanders (Vt.) and Elizabeth Warren (Mass.) and – despite stoking controversy early on within the party caucus – by House Speaker Nancy Pelosi.

On Tuesday night Omar painted the outcome as a victory of “organized people” over “organized money.”

“Despite outside efforts to defeat us, we once again broke turnout records. Despite the attacks, our support has only grown,” she tweeted.

“This election isn’t about me. It’s about an agenda rooted in people’s everyday struggles – and the corporations and rightwing donors who are threatened by it,” Omar said.

“It’s about standing up to a President who promised to ban an entire group of people from this country based solely on their Muslim identity, calls our countries of origin ‘shithole countries,’ and threatened to send us back to where we came from.”

In 2018 she won the Democratic primary for the seat formerly held by Rep. Keith Ellison, who stepped down to run for attorney general of Minnesota. When elected in November of that year, she became one of the first two Muslim women elected to Congress, along with fellow Squad freshman, Rep. Rashida Tlaib of Michigan.

In November’s election Omar will be up against Lacy Johnson, a black Minneapolis businessman endorsed by President Trump who easily won the Republican primary on Tuesday.

Tlaib handily won her primary in Michigan’s 13th congressional district last week, declaring afterwards that the Squad is “here to stay, and it’s only getting bigger.”

The fourth, and arguably the least controversial, member of the Squad, Rep. Ayanna Pressley, is running unopposed in her primary in Massachusetts’ 7th Congressional District on September 1. Pressley two years ago defeated a 10-term incumbent in the district’s Democratic primary.