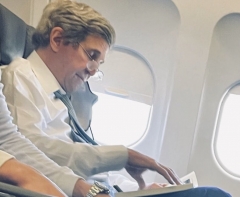 (CNSNews.com) – President Biden's special climate envoy John Kerry dismissed as “malarkey” a social media kerfuffle sparked by a photo showing him not wearing a mask while on an American Airlines domestic flight on Wednesday.

“Feels like there’s some St. Patrick’s day ‘malarkey’ afoot on Twitter,” Kerry tweeted on Wednesday night. “Let’s be clear: If I dropped my mask to one ear on a flight, it was momentary. I wear my mask because it saves lives and stops the spread. It’s what the science tells us to do.”

In a photo first published by the Tennessee Star, a conservative outlet, Kerry is seen sitting on a flight, reading, nose and mouth uncovered and with what appears to be a mask dangling from his left ear.

The tone of critical reactions on Twitter ranged from annoyance to sarcasm:

Former Arkansas Gov. Mike Huckabee: “Will @AmericanAir ban him or if not at least publicly acknowledge that just like His Highness the John of Kerry, he lives by different rules than rest of us?”

Chief and Food Network TV personality Andrew Gruel: “Normally I hate the nitpicking, but this is the world in which we live. My six year old was reprimanded for having his mask below his nose for 30 seconds. Babies have been removed from planes.”

Former U.S. Ambassador to Germany and acting Director of National Intelligence Richard Grenell: “John Kerry doubles down. Your eyes are lying people! It’s ‘malarkey’. Kerry says he was complying with the rules and always wears his mask. Anyone seeing something different is spreading Russian disinformation, I guess.”

Sen. Tom Cotton (R-Ark.): “The only surprise is that John Kerry was flying commercial.”

Hudson Institute senior fellow Michael Doran: “First you force him to fly commercial and then you expect him to wear a mask as well? Is there no limit to the indignities to which you will subject this public servant?”

Some drew attention to news reports this week about another U.S. airline removing a four-year-old passenger with autism for not wearing a mask – despite his parents providing a medical note describing their son’s condition.

Other Twitter users defended President Biden’s climate czar, suggesting that he may have been about to eat or drink.

Fox News quoted the passenger who purportedly took the photo – on what was described as a mostly full Boston-Washington flight – as saying that Kerry’s mask had been off for five minutes.

Scientists say that masks, correctly warn, capture coronavirus-containing droplets that are emitted when a person speaks, sneezes or coughs, and that wearing one reduces the chances of transmitting and catching COVID-19.

On his first day in office, Biden issued an executive order instructing federal authorities to require mask wearing on commercial aircraft, as well as on trains, ferries, other forms of public transportations, and at airports.

On January 29, the Centers for Disease Control and Prevention (CDC) issued a public health order implementing Biden’s order, with specific guidelines on the type of masks required, snugness of fit, etc. It said masks were to be worn on flights at all times except:

--while eating, drinking, or taking medication, for brief periods;

--while communicating with a person who is hearing impaired when the ability to see the mouth is essential for communication;

--if, on an aircraft, wearing of oxygen masks is  needed because of loss of cabin pressure or other event affecting aircraft ventilation;

--if unconscious (for reasons other than sleeping), incapacitated, unable to be awakened, or otherwise unable to remove the mask without assistance;

Two days later, the TSA announced that, with effect from February 2, it was recommending fines for non-compliance ranging from $250 for a first offense, up to $1,500 for repeat offenders.

“Exemptions include travelers under the age of 2 years old, those with a disability who cannot wear a mask, or cannot safely wear a mask because of the disability as defined by the Americans with Disabilities Act, and those for whom a mask would create a risk to workplace health, safety, or job duty as determined by relevant workplace safety guidelines or federal regulation,” the TSA said.

On February 1, American Airlines informed customers that it was aligning its own mask requirement with the federal government mandate.

“Consistent with U.S. government directives, individuals who refuse to wear a mask may be denied boarding, removed from the aircraft or subject to penalties under federal law, in addition to being barred from future travel with American,’ the airline stated.

On Wednesday afternoon, American Airlines tweeted, in response to a post criticizing Kerry, “We require masks on board our aircraft and are looking into this.”

See also:
Biden Climate Envoy Kerry’s Defense of Carbon-heavy Private Jet Use: ‘It’s the Only Choice for Somebody Like Me’ (Feb. 4, 2021)