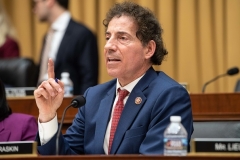 (CNSNews.com) – House Speaker Nancy Pelosi plans on Friday to relaunch a legislative push to create a body of mostly medical appointees empowered to determine whether a sitting president of the United States is “unable to discharge the powers and duties of his office.”

Pelosi will be joined by Rep. Jamie Raskin (D-Md.), who in 2017 introduced a bill to establish an “Oversight Commission on Presidential Capacity,” mandated to “carry out a medical examination of the President to determine whether the President is mentally or physically unable to discharge the powers and duties of the office.”

Raskin’s bill attracted 67 co-sponsors – all Democrats – but did not advance in the then-Republican controlled House.

Pelosi and Raskin will this morning unveil new legislation with the same purpose, according to a release from the speaker’s office, which entitled the bill the “Commission on Presidential Capacity to Discharge the Powers and Duties of Office Act.”

Earlier on Thursday, Pelosi invited reporters to return to Friday, when she said “we’re going to be talking about the 25th Amendment.”

The initiative comes at a time when President Trump is recovering from COVID-19, and 25 days out from Election Day.

The 25th Amendment to the Constitution, which deals with succession of power in the event of presidential vacancy or inability, provides (in section four) for the vice president and a majority of White House cabinet members to determine if a president is unfit to hold office, and in such a case for the vice president to assume the role of acting president.

But it alternatively allows for that decision to be taken by the vice president and a majority of “such other body as Congress may by law provide.”

It is that “other body as Congress may by law provide” that Raskin’s legislation seeks to create.

Raskin, a House Judiciary Committee member and former constitutional law professor at American University, told CNN’s Chris Cuomo on Thursday night that the legislation “is not about one president. It doesn’t mention President Trump. It’s about having the body in place that’s contemplated by the 25th Amendment.”

But in the era of COVID-19, an “age of real danger and uncertainty,” he said, “this is something we should do for the continuity and stability of office.”

In previous interviews on his bill, Raskin also denied that the initiative was aimed at Trump.

“Do you believe that this bill will end up resulting in the removal of President Trump?” he was asked in an MSNBC interview in July 2017.

“I’ve got no idea, and it’s not my call and it’s really not my interest,” Raskin replied. “What we have is a constitutional responsibility to discharge here, which is to set up the body that’s called for in the 25th Amendment.”

Six months later, Raskin told CNN the amendment was a “tool” for the current time.

Four months before he introduced his bill, the newly-elected Raskin was among dozens of Democrats who chose to stay away from Trump’s inauguration. He argued at the time that “these are not normal times and I cannot pretend as if they are. The moral and political legitimacy of this presidency are in the gravest doubt.”

The commission envisaged in Raskin's 2017 bill would comprise 11 members:

Those ten members would then vote on an 11th – either a physician or a retired statesperson as listed above – to serve as chair. Members would serve for four years.

If directed by Congress in a concurrent resolution, the commission would be required, within 72 hours, to “carry out a medical examination of the President to determine whether the President is mentally or physically unable to discharge the powers and duties of the office.”

It would make such a determination if the examination found that “the President is temporarily or permanently impaired by physical illness or disability, mental illness, mental deficiency, or alcohol or drug use to the extent that the person lacks sufficient understanding or capacity to execute the powers and duties of the office of President.”

Within 72 hours of the examination, the commission would deliver a report of its findings and conclusions to the speaker of the House and president pro tempore of the Senate.

“Any refusal by the President to undergo such examination shall be taken into consideration by the Commission in reaching a conclusion in the report,” the bill said.