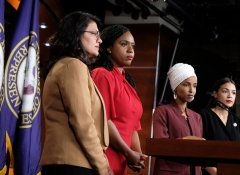 (CNSNews.com) – After easily defeating a primary challenge in her Michigan district, Rep. Rashida Tlaib said Wednesday that the “Squad” – as she and three other high-profile left-wing congresswomen are known – is “here to stay, and it’s only getting bigger.”

“Headlines said I was the most vulnerable member of the Squad,” Tlaib tweeted after winning by a projected 33-point margin a rematch against Detroit City Council president Brenda Jones. (Two years ago, Tlaib beat Jones by a single percentage point.)

“My community responded last night and said our Squad is big,” she continued. “It includes all who believe we must show up for each other and prioritize people over profits. It’s here to stay, and it’s only getting bigger.”

The Squad has up to now comprised Reps. Alexandria Ocasio-Cortez (N.Y.), Ilhan Omar (Minn.), Ayanna Pressley (Mass.), and Tlaib, all of whom entered Congress in 2018 after campaigns supported by the left-wing PAC Justice Democrats.

Another Justice Democrat-endorsed primary challenge against an establishment-backed incumbent is coming up on September 1, when Alex Morse, the 31-year-old mayor of Holyoke, Mass., aims to unseat Rep. Richard Neal (D-Mass.), 71, who has been in Congress since 1989 and chairs the House Ways and Means Committee.

After House Speaker Nancy Pelosi on Wednesday released a video endorsing Neal, Morse tweeted, “People power beats the establishment machine. To beat Trump, Democrats need to reject corporate money and take a moral stand for America’s working class. It’s time to get on board with the generational change sweeping progressives like [Bush] and [Bowman] into Congress.”

‘Bernie, if the Democratic establishment didn’t gang up on you …’

Sen. Bernie Sanders (I-Vt.), who was himself backed by Justice Democrats before he suspended his presidential primary campaign in April, endorsed Bush, Bowman and Newman in their respective primaries.

On Wednesday he held a livestreamed virtual discussion with Bush, Bowman and Tlaib, who again raised the idea of a growing Squad.

“For all the corporate bullies and the corporations that think that they’re going to make government about them, there’s a bunch of us coming, and our Squad is getting bigger and bigger, and we’re going to continue to fight back against that,” Tlaib said, as Bush snapped her fingers in agreement.

After Sanders thanked small-figure donors for contributing to progressive campaigns, including his own, Bowman spoke.

“Bernie, if the Democratic establishment didn’t gang up on you and jump you, you would have been the nominee for the Democratic Party. You outraised everyone, you was killing them!”

Sanders, Tlaib and Bush smiled and laughed as he spoke – with Bush saying “uh-oh” at one point – before Sanders said, “No, thank you very much Jamaal. Let me thank all three of you.”

After ending his campaign, Sanders endorsed Joe Biden, making him the Democrats’ presumptive presidential nominee. The Sanders and Biden camps then set up six “unity” taskforces, designed to ensure that Biden embraces issues of importance to progressives.