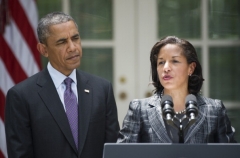 (CNSNews.com) – As Joe Biden rolls out nominees and appointees for his administration, the naming of Susan Rice to head his White House Domestic Policy Council is drawing mixed reactions, given the former ambassador to the U.N.’s deeply controversial role in the September 2012 Benghazi affair.

Biden on Thursday named Rice as part as what he called “a crisis-tested team of respected public servants who will lead with compassion, integrity, and character to make our government work for all Americans.” He plans to introduce her and his nominees for U.S. trade representative and secretaries of agriculture, housing and development, and veterans affairs in Wilmington, Delaware on Friday afternoon.

Rice said in a tweet she was “humbled and excited by this call to serve. The scale of the challenges ahead demands a government that works for all Americans. We must restore trust in government through strong and equitable domestic policy that builds back better here at home. Let’s GO!”

Rice served as ambassador to the U.N. during President Obama’s first term, and as national security adviser during the second. Her appointment won praise from former officials in that administration.

Samantha Power, who succeeded Rice as ambassador to the U.N., called it “an inspired choice,” while John Kerry, former secretary of state and incoming climate change czar said she was “one of the most brilliant, tenacious, and determined colleagues I’ve ever known.”

(Rhodes, Power and Rice have all been involved in a group called National Security Action, Rhodes as co-chair and Rice and Power as advisery council members. Its stated aim was “advancing American global leadership and opposing the reckless policies of the Trump administration that endanger our national security and undermine U.S. strength in the world.” The other co-chair, former top aide to then-Secretary of State Hillary Clinton Jake Sullivan, is Biden’s pick for national security adviser.)

“It makes me sick to think a person of such low character could sit in the same office I sat in when I was advising one of our greatest presidents,” commented Gary Bauer, who was domestic policy adviser to President Reagan in 1987-1988. He called Rice “the chief liar in the Benghazi massacre.”

Bauer was referring to Rice’s role in the Obama administration’s handling of the deadly Sept. 11, 2012 attack on the U.S. Consulate in Benghazi, Libya, which cost the lives of Ambassador Chris Stevens, Navy SEALs Tyrone Woods and Glen Doherty, and foreign service officer Sean Smith.

Five days after the attack, the White House deployed Rice to deliver to five Sunday television talk shows the message that the attack was a “spontaneous reaction” to an online video mocking Islam’s prophet.

The administration would only later acknowledge publicly that the assault was a terrorist attack, with a probable al-Qaeda link.

That she did so stoked Republican suspicions that the administration was trying to spin the events for political ends – and mislead voters – in the closing weeks of Obama’s re-election campaign.

‘Fodder for my critics to pick at’

Clinton was secretary of state during the episode, and the furor dogged her subsequent campaign for the White House. It also appeared to have cost Rice the chance of succeeding Clinton as secretary of state, as Rice wrote in her 2019 memoir, Tough Love.

That December, she asked Obama to withdraw her name from consideration, and the post went to Kerry. Six months later Obama tapped Rice as National Security Adviser, a post which unlike that of secretary of state does not require Senate confirmation.

Rice consistently maintained that her comments were based on the best information available to the intelligence community at the time.

It was later revealed that the White House had advised her to focus on the video during the interviews.

In an email released in 2014 in response to a Freedom of Information Act request, sent two days before Rice’s television appearances – subject line: “PREP CALL with Susan” – the NSC’s Rhodes recommended that she “underscore that these protests are rooted in an Internet video, and not a broader failure of policy.”

In her memoir, Rice wrote, “I also acknowledge that there were some words and phrases I uttered on Sunday, September 16, that I wish I could restate with more precision, less certitude, or not have said at all. None of them materially changed the substance of what I said, but they offered fodder for my critics to pick at.”

Describing herself as “a team player,” she wrote that she had put the team first, and in the process did herself “a disservice.”