(CNSNews.com) – Twenty-four hours after the Food and Drug Administration grants authorization for a coronavirus vaccine, distribution to administration facilities across the nation will be underway, according to the four-star U.S. Army general overseeing the mammoth task of delivering the vaccine under the Trump administration’s Operation Warp Speed.

And 24 hours after that, Vice President Mike Pence said on Thursday, the mass vaccination of Americans against COVID-19 will be in progress.

Currently, drug makers Pfizer and Moderna have announced that phase-three trial data have found their candidate vaccines to be 90 percent and more than 94 percent effective respectively. Both are awaiting “emergency use authorization” (EUA) by the FDA.

Perna explained that, under collaborative plans months in development, vaccines once authorized by the FDA will be shipped by FedEx and UPS to administration points across the United States and its territories, including hospitals, doctors’ offices, pharmacies, long-term healthcare facilities – “places where people are comfortable going.”

Vaccines and kits will be distributed to “any place that a state wants to administer the vaccine, as long as they’re enrolled into our process,” he said. “We can go to one place in a state, or we can go to 10,000 places in a state. The capability and the capacity exist because we came together in a whole-of-America approach.” 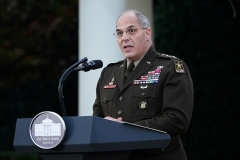 Because of that, Perna said, “I can look you in the face and say to you: EUA comes, 24 hours later vaccines will be distributed out to the American people, and be ready for administration.”

Pence said that from the time President Trump announced the launch of OWS, “General Perna and his team have been working literally around the clock to build the distribution plan that you see that’s in effect.”

“I think every American can be proud of the fact that we have a plan in place, that the moment that the FDA concludes that that vaccine is safe and effective, we have a system in place to begin within 24 hours shipping that vaccine to hospitals, healthcare facilities,” he said. “And 24 hours after that, literally injecting that vaccine into Americans.”

Pence said the CDC was developing vaccination priority guidelines, which he indicated would likely involve prioritizing at the outset the most vulnerable people, as well as healthcare workers and first responders.

Fauci: ‘This is really solid’

Dr. Anthony Fauci, director of the NIH’s National Institute of Allergy and Infectious Diseases, voiced optimism that priority recipients would be receiving vaccines by the end of December.

He pushed back against any skepticism about the safety of the process, saying he hears of people asking, “Did you rush this? Was this too fast? Is it really safe? And is it really efficacious?”

“The process of the speed did not compromise at all safety, nor did it compromise scientific integrity,” he said. “It was a reflection of the extraordinary scientific advances in these types of vaccines, which allowed us to do things in months that actually took years before. So I really want to settle that concern that people have about that.”

Fauci said that the vaccine trial data was not considered by people with a political or financial agenda.

“It was actually an independent body of people who have no allegiance to anyone – not to the administration, not to me, not to the [pharmaceutical] companies – that looked at the data and deemed it to be sound.”

The FDA would now examine that data “very carefully,” in conjunction with an expert vaccine advisory committee, before the FDA makes an EUA decision.

“We need to put to rest any concept that this was rushed in an inappropriate way,” he said. “This is really solid.”

Fauci also stressed that just because vaccines were on their way, this was not the time to be complacent. He underlined the importance of continuing simple public health measures including mask wearing, social distancing, “avoiding congregate settings” – but also making clear that “we’re not talking about shutting down the country, we’re not talking about locking down.”

In emphasizing the importance of those measures, he compared the situation of waiting for the vaccine to soldiers in battle anticipating the arrival of reinforcements.

“If you’re fighting a battle, and the cavalry’s on the way, you don’t stop shooting,” he said. “You keep going until the cavalry gets her.”