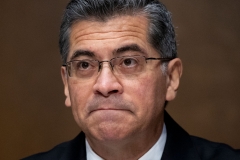 Xavier Becerra, nominated by President Joe Biden to be the Secretary of the Department of Health and Human Services. (HHS)

(CNS News) -- As Xavier Becerra awaits a vote in the Senate on his nomination to be the next Secretary of Health and Human Services (HHS), some conservative leaders told CNS News why they oppose Becerra. Pro-life leader Lila Rose, in particular, stressed that, “Becerra is a pro-abortion activist and friend of the abortion industry, with no medical background.”

“As head of HHS, Becerra can harness the full power of federal public health toward the destruction of our most vulnerable lives,” Rose said. “This is chilling. Such power and responsibility must not be entrusted to a man who ignores science and openly violates the civil rights of journalists, churches, and the preborn.”

“The Senate should oppose this dangerous nominee, or his agenda will become public health policy nationwide,” she added.

Rose is not alone. Conservative leaders roundly oppose Becerra, a former left-wing congressman who currently is the attorney general of California.

The political action wing of the Heritage Foundation, Heritage Action for America, said in a statement, “Xavier Becerra has spent his entire career fighting for socialized health care, catering to the abortion industry, and trampling on Americans’ religious freedom.”

“If confirmed, Becerra would bring his extreme agenda to HHS,” said the organization. “Heritage Action is working to expose the radical personnel and policies being advanced by this administration, and we are urging every senator to reject Becerra’s nomination.”

Craig Shirley, a best-selling author and Ronald Reagan biographer, told CNS News in an email, “He should not be approved. Becerra has no medical experience, but he does as a Washington bureaucrat. He is not a problem-solver. He is a problem-creator. Nothing good will come from Becerra's appointment.

March for Life President Jeanne Mancini said in a statement, “Confirming this nominee to lead the Department of Health and Human Services will only further divide America. Americans deserve a well-qualified professional with real medical experience at the helm of HHS, not a puppet for big abortion.”

“This pick underscores the importance of winning in Georgia to prevent pro-abortion forces from taking control of the U.S. Senate,” said Dannenfelser. “Republican senators must stand firm and stop this unacceptable nomination from going forward.”

Women and family-based conservative organizations also shared their disapproval of the nomination.

Heather Manning, policy director for the Independent Women’s Voice, expressed concern about Becerra’s policies and how they could affect religious liberty.

“Xavier Becerra, Biden’s nominee to lead the Department of Health and Human Services, should be rejected because he fails to appreciate Americans' fundamental, constitutional rights,” said Manning. “Becerra has abused his power as Attorney General of California to attack the civil rights of pro-life, religious people, of private charities, of gun owners, and of female students.”

The CEO of Concerned Women for America, Peggy Nance, called out Becerra’s record of support for extreme abortion practices.

“All Senators should oppose him,” said Nance. “He is simply the wrong choice for this important position.”

Among other things, “Becerra’s lack of healthcare experience, enthusiasm for replacing private health insurance with government-run Medicare-for-all, and embrace of radical policies on immigration, abortion, and religious liberty, render him unfit for any position of public trust, and especially for HHS Secretary,” wrote the lawmakers.

“Our nation cannot afford to lose valuable time in this [COVID] battle by installing an HHS Secretary who is not up to the challenges we face,” reads the letter.  “But that is exactly what you propose to do by nominating Mr. Becerra, a man with no meaningful experience in healthcare, public health, large-scale logistics, or any other areas critical to meeting our present challenges.”

In a letter to the Senate Committee on Health, Education, Labor & Pensions and the Senate Finance Committee, 65 pro-life, pro-family, and religious leaders urged the Senate to reject Becerra’s nomination.

“Mr. Becerra is an enemy to every pro-life policy and law and has demonstrated complete disregard for the religious and moral convictions of those opposed to the brutal act of abortion,” they wrote. “His radical record in public office as California’s Attorney General and member of Congress leads our organizations to ask you to reject Mr. Becerra’s nomination.”