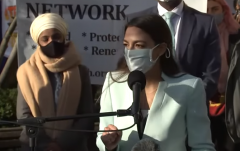 (CNSNews.com) - Rep. Alexandria Ocasio-Cortez (D-N.Y.) joined with a group of like-minded leftists on Thursday to make it clear that they will hold the Biden administration to its promise of a Green New Deal.

She rallied her fellow progressives, telling them, “We’re winning. It's working. It's happening. And we are going to secure our future. We're going to secure the basic tenets of a Green New Deal, a multi-trillion jobs program for climate, for environmental, racial, gender and class justice.”

She spoke outside the Democrat National  Committee building in Washington, D.C.

That's our message today -- to keep your promise. And we know that we don't just make that demand and walk away. We have to organize for it. We have to bring the heat for it. Because there's a whole lot of people that tried to just shove a bunch of money before this election, to try to buy their seat at the table. But we organize for ours. And we're not easily going to let that go.

So that's what this movement is all about. I want to thank you. And I don't want anybody here to think that we're not winning.  So let me tell you something -- we're winning. It's working. It's happening.

Following AOC to the podium, Rep. Rashida Tlaib (D-Mich.) said, "We're going to make sure the Biden administration sticks to our timeline, moving towards our timeline. And so I ask all of you, do not move from the needle -- do not! We are more than them."

'Are they who you want in charge?'

Rep. Dan Crenshaw (R-Texas), reacting to the leftists' demands Thursday night on Fox News, said, "Listen to them. Are they who you want in charge? I don't think so, and I think that message was largely rejected at the ballot box, to be honest.”

But Joe Biden has to deal with a simple fact, he invited all these socialists to his little dinner party, made Kamala Harris – she’s the most liberal senator in the Senate --made her his VP pick – she’s a signatory of Medicare for All, takes away your private insurance; a signatory of the Green New Deal -- Green New Deal is considered a crucial framework for climate change policy, according to Joe Biden's campaign website.

So he invited all of these socialists to his little dinner party, and he can't be surprised when they got a little drunk on power and now they have a very loud voice, which is exactly what's happening. They are not incorrect when they say that they're winning -- within the Democratic Party.

Now, I don't think they're winning over America, because we need to remember something -- Republicans took back almost a dozen seats in the House, and we should be pretty happy about that. I think the Democratic platform and policy was largely rejected this time.  And this is what you get when you put socialism on the agenda.

Crenshaw said Joe Biden is someone who moves "with the political winds," whether it's health care or the Green New Deal.