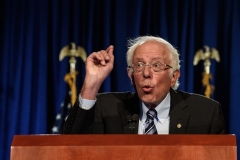 (CNSNews.com) - Sen. Bernie Sanders (I-Vt.) says the Democrat-led Congress will have to be "extremely bold in addressing the major crises facing working families and the middle class, and I intend to be very active in that process."

Sanders told The Late Show with Stephen Colbert Thursday night his first priority as chairman of the Budget Committee "is to work on a comprehensive reconciliation bill," which can be passed with a simple majority vote, in contrast to most legislation, which requires 60 votes to invoke cloture and limit debate.

"This is a means by which we can pass very significant legislation with a majority, with 51 votes and not with 60. And I'm going to make that reconciliation bill as bold and aggressive as I possibly can," Sanders continued:

We face more crises today than any time in the modern history of this country. It's not just the terrible pandemic which has claimed almost 400,000 lives; it is massive unemployment, millions of people unable to feed their kids, people who are being evicted, people who can't go to the doctor because they have no healthcare.

So what we have got to do is respond to the pain the American people are feeling, which is enormous right now. People are losing faith in government. We have to restore the faith by saying, you know what? We hear your pain and we're going to respond in a bold manner.

And, in addition to that, probably in a second reconciliation bill, we have to deal with some of the systemic, long-term, ongoing problems facing this country. People can't live on $10 an hour. We've got to raise the minimum-wage to a living wage. Insane that we are the only major country on Earth not to have guaranteed healthcare to all, or have paid family and medical leave.

You know what? We've got to deal with climate change, with countries around the world, or we're not going to leave much to our kids or grandchildren. In other words, at this particular moment in history, Congress will have to rise up and be extremely bold in addressing the major crises facing working families and the middle class, and I intend to be very active in that process.

Sander said he also will start the effort to raise taxes on the "wealthiest" people and the largest corporations, "who, today, are not paying, by any stretch of the imagination, their fair share of taxes."

Senate Minority Leader Chuck Schumer (D-N.Y.), soon to be majority leader, indicated this summer that he's open to abolishing the filibuster, which would make it much easier for Democrats to pass their agenda.

"We have a moral imperative to the people of America to get a whole lot done, if we get the majority, which God-willing we will, and keep it in the House, and Biden becomes President, and nothing is off the table," Schumer said in August.