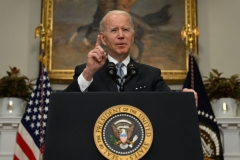 President Joe Biden provides updates on the Ukraine-Russia conflict in the Roosevelt Room of the White House in Washington, DC, on April 21, 2022. - Biden says will ask Congress to expand Ukraine military aid. (Photo by JIM WATSON/AFP via Getty Images)

(CNSNews.com) - "Every American taxpayer, every member of our Armed Forces, can be proud of the fact that our country's generosity, and the skill and service of our military, helped arm and repel Russia's aggression in Ukraine, to beat back Putin's savagery," President Biden said on Thursday, as he announced another $800 million in military assistance to Ukraine, on top of $800 million last week.

The president also announced a second $500 round of economic assistance to the war-torn country.

A reporter asked Biden, "How long can the United States maintain the level and pace of military support for Ukraine?"

"Well, we have the capacity to do this for a long time," Biden responded:

"The question is, are we going to continue to maintain the support of the international community and keep the pressure on Putin to prevent him from overrunning the country, number one. And number two, make sure we continue to maintain the economic sanctions, which over time, and we're beginning to see, are devastating their economy, their ability to move forward.

"So the most important thing right now is maintaining unity. So far, so good."

Biden began his remarks by explaining that the $800-million in "security assistance" to Ukraine that he signed last week included "new capabilities," such as artillery systems and armored personnel carriers.

Biden said the equipment "is responsive to Ukraine's needs and tailored to support the intensified fighting in the Donbas region, which is a different war than in other places because both topographically it's different -- it's flat, it's not in the mountains, and it requires different kinds of weapons to be more effective.”

"Today, I'm announcing another $800 million to further augment Ukraine's ability to fight in the east in the Donbas region. This package includes heavy artillery weapons, dozens of howitzers, and 144 thousand rounds of ammunition to go with those howitzers. It also includes more tactical drums.

"The United States alone has provided 10 anti-armor systems for every one Russian tank that is in Ukraine -- a ten to one ratio. We're sharing, and will continue to share, significant timely intelligence with Ukraine to help them defend them against Russian aggression."

Biden even "modernized" a famous saying by President Teddy Roosevelt: "Sometimes we will speak softly and carry a large javelin. Because we're sending a lot of those as well."

Biden said the United States now must "accelerate" its assistance to Ukraine to help prepare it for Russia's offensive in the eastern part of the country.

But he needs Congress to give him more spending authority:

"Combined with our recent drawdowns, we'll ensure a steady flow of weapons and equipment into Ukraine over the next couple of weeks. However, with this latest dispersal, I've almost exhausted the drawdown authority I have that Congress authorized for Ukraine in a bipartisan spending bill last month.

"In order to sustain Ukrainian (sic) for the duration of this fight, next week I'm going to have to be sending to Congress a supplemental budget request to keep weapons and ammunition flowing without interruption to the brave Ukrainian fighters."

Biden said he hopes and expects that "Congress will move and act quickly."

He also announced that the U.S. intends to provide an additional $500 million in direct economic assistance to the Ukrainian government. "This brings our total economic support to Ukraine to $1 billion in the past two months," Biden said.

Biden also announced a new program to help Ukrainian refugees come directly to the United States from Europe -- without having to come across the Southwest border, as some are doing now.

"This new humanitarian parole program will complement the existing legal pathways available to Ukrainians, including immigrant visas and refugee processing,"

"It will provide an expedient channel for secure legal migration from Europe to the United States for the Ukrainians who have a U.S. sponsor such as a family or an NGO. This program will be fast, it will be streamlined, and it will ensure the United States honors its commitment to the people of Ukraine and need not go through our southern border."