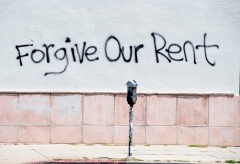 A sign seeking rent forgiveness is seen on a wall on May 1, 2020, in Los Angeles, California. (Photo by VALERIE MACON/AFP via Getty Images)

(CNSNews.com) - Because the House of Representatives failed to extend the eviction moratorium before leaving town for seven weeks, the Biden administration has now done what the Supreme Court specifically said it doesn't have the authority to do:

CDC Director Dr. Rochelle Walensky on Tuesday signed another order extending the eviction moratorium until October 3. This new order applies to counties experiencing substantial and high levels of community transmission of COVID-19, which covers most of the country.

This is the second extension of the moratorium, which expired this past Saturday.

President Biden told reporters at the White House on Tuesday: "Well, look, the courts made it clear that the existing moratorium was not constitutional; it wouldn’t stand. And they made that clear back in, I guess, July 15th or July 18th."

It was on June 29th that Justice Brett Kavanaugh said the Centers for Disease Control and Prevention had "exceeded its existing statutory authority by issuing a nationwide eviction moratorium." He said Congress needed to legislate the moratorium.

But because the moratorium was set to expire on July 31, Kavanaugh allowed it to remain in effect, giving the states more time to distribute congressionally appropriated rental assistance money.

On Tuesday, President Biden said he's conferred with constitutional scholars, and the "bulk" of them say the most recent CDC order is "not likely to pass constitutional muster."

"But," he added, "there are several key scholars who think that it may and it’s worth the effort."

So Biden asked the CDC "to go back and consider other options that may be available to them.”

“Whether that option will pass constitutional muster...I can’t tell you,” Biden said. “ I don’t know.  There are a few scholars who say it will and others who say it’s not likely to.

“But, at a minimum, by the time it gets litigated, it will probably give some additional time while we’re getting that $45 billion out to people who are, in fact, behind in the rent and don’t have the money.”

Biden said, "We were under the impression that the states were moving this money out relatively rapidly." But that is not the case.

According to the Associated Press, "Only about $3 billion of the first tranche of $25 billion had been distributed through June by states and localities. A second amount of $21.5 billion will go to the states."

Biden said "the hope is" that by helping tenants make good on their back rent, landlords will not evict them at a time when those tenants may be returning to work, so they can pay their future rent.

In her statement on Tuesday after Biden spoke, Dr. Walensky invoked the "public health consequences" of evictions, given the rapidly spreading delta variant:

The emergence of the delta variant has led to a rapid acceleration of community transmission in the United States, putting more Americans at increased risk, especially if they are unvaccinated. This moratorium is the right thing to do to keep people in their homes and out of congregate settings where COVID-19 spreads. It is imperative that public health authorities act quickly to mitigate such an increase of evictions, which could increase the likelihood of new spikes in SARS-CoV-2 transmission.  Such mass evictions and the attendant public health consequences would be very difficult to reverse.

Meanwhile, Biden said he's been "pushing for" states to distribute the rental assistance.

"And so that’s what we’re working on.  Some states have done it and some communities have...The money is there.  It’s not — we don’t have to send it out.  It’s been sent out to the states and counties — billions of dollars — for the express purpose of providing for back rent and rent for the people who are in the middle of this crisis.  And that’s there; that’s what we’re pushing now.  And we’ve been pushing that.  That’s the immediate thing to do."

The National Apartment Association (NAA), which serves the interests of landlords, tweeted on Tuesday:

-- NAA has always held the same position – the eviction moratorium is an unfunded government mandate that forces housing providers to deliver a costly service without compensation and saddles renters with insurmountable debt.

-- The Administration and Congress need to fully fund existing and future rent debt and get rental assistance flowing or face a housing affordability catastrophe.

-- The idea that we want people to lose their housing is simply untrue – this is an industry of people and homes, not empty buildings. It’s past time for the government to enact responsible and sustainable solutions that prioritize making both renters and housing providers whole.

Rep. Patrick McHenry (R-N.C.)  the top Republican on the House Financial Services Committee, is accusing the Biden administration of trying to “skirt the judicial branch” with the CDC’s new moratorium order:

“The courts made clear the CDC lacks the authority to extend the eviction moratorium. Even President Biden admitted this fact,” McHenry said in a statement.

“Democrats have no real plan to fix this problem, which Republicans have been sounding the alarm on for months. Instead of continuing to kick the can down the road, we should address this avoidable crisis once and for all by fixing the Biden Administration's absolute failure to administer the ERA [Emergency Rental Assistance] programs.

"Republicans have been offering real solutions to pay off the back rent of struggling tenants across the country. What have Democrats offered? Nothing but a political stunt that does more to placate their radical base than get relief to renters and landlords.”