Biden on COVID Surge, Test Shortage: 'We Have to Do Better'; 'What Took So Long Is--It Didn’t Take Long at All' 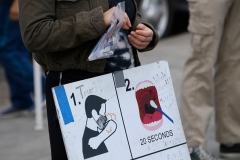 Demand for rapid COVID tests is surging ahead of the holidays, outstripping supply. (Photo by PATRICK T. FALLON/AFP via Getty Images)

(CNSNews.com) - President Biden on Tuesday announced his plan to expand COVID testing as omicron surges across the land. "We have to do more. We have to do better, and we will," he promised.

So, I’m announcing today: The federal government will purchase one half billion — that’s not million; billion with a ‘B’ — additional at-home rapid tests, with deliveries starting in January. We’ll be getting these tests to Americans for free.  And we’ll have websites where you can get them delivered to your home.

We have arranged for it to be easier for you to find a free COVID testing site near you on Google.  Just enter “COVID test near me” in the Google search bar and you can find a number of different locations nearby where you can get tested.

And we’re going to continue to use the Defense Production Act as we did earlier this month to make sure we’re producing as many tests and as quickly as possible.

The bottom line is, it’s a lot better than it was, but we’re taking even more steps to make it easier to get tested and get tested for free.

'All of a sudden, everyone rushed  to the counter'

In response to a reporter's question, Biden noting that COVID "is spreading so rapidly...just happened almost overnight." He said his administration's response to the surge is "not a failure, but the alarm bells went off."

I don’t think anybody anticipated that this was going to be as rapidly spreading as it did. And so, the question is: We had a lot of people who have access to a test, who could order them, could — could have their insurance pay for them, et cetera.

But it all started — all of a sudden, it was like everybody rushed to the counter. There was a big, big rush.

And I knew that was coming, so what I tried to do is meet with the companies and use the Defense Production Act to get a half a billion more tests and figure out how to get them to their homes, get them on the shelves in the store. I mean, so that — that’s what it’s all about.

"Well, what took so long is — it didn’t take long at all.  What happened was the Omicron virus spread even more rapidly than anybody thought...."

Biden offered no details on how and when Americans can order the promised 500 million at-home tests, and his spokeswoman Jen Psaki had no idea.

"So, when can Americans expect to see these tests?" a reporter asked Psaki, who spoke shortly before the president did. "Where are they coming from? How many can a family or person order at once? Is this website going to be able to sustain all of these people who will want to get on and get these tests?"

Psaki responded: "To answer your last question, yes, that is our expectation, and we are preparing for that. We are -- we will have more information as it is available, including what the website looks like. We will make the website available as soon as these tests are available. They will start to be available in January.

“And in terms of the numbers that different families can order, that is -- we are working through all those very important details right now.”

The reporter asked if the expanded testing, including the 500 million rapid at-home tests, are going to make a difference, given the current holiday COVID surge:

The answer, apparently, is no:

But this doesn't help anxious Americans, both the vaccinated and the unvaccinated, who want to test themselves, their relatives, and their friends ahead of Christmas gatherings. At-home tests are in short supply.

The reporter told Psaki: "I still have to ask, when can every American who wants to get an at-home test get one because they can't get one today."

And that is something that can happen very rapidly, and our team is ready to deploy those resources. There are still 20,000 sites across the country where people can go. There are still 50 million tests that we are distributing to rural community health centers, and we're doing this as quickly as possible.

Five hundred million tests in January is the largest order we have ever made to date, and we're going to do it as quickly as we can, but they won't be available until January.

Another reporter asked Psaki, "Is the president satisfied at the speed at which all of this is happening? It was nearly four weeks ago over Thanksgiving vacation in Nantucket when he first talked about the omicron variant. We've known Christmas, obviously, is coming for a long time, and yet these sites will not be set up until the end of this week, which is Christmas. Is he satisfied of the speed in which this is all happening?"

"Well, what the president's promise to the American people is, Jeff, is to constantly reexamine and improve our COVID response, including testing and testing access, and always look for a way to do better. And the announcement today is an effort to do exactly that.

“And his announcement today is a reflection of that and should be seen as his own assessment that we should be doing more.”