Biden Economic Adviser: 'Our Economy Is in a Period of Transition' 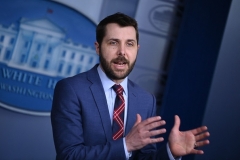 Host Martha MacCallum asked Deese if he agrees with those who say the United States is heading into recession in the near term.

(According to the National Bureau of Economic Research, a recession is a "significant decline in economic activity spread across the economy, lasting more than a few months, normally visible in real GDP, real income, employment, industrial production, and wholesale-retail sales.)

"Well, here's where I think we are," Deese said:

"Our economy is in a period of transition. We're moving from the strongest economic recovery in modern history to what can be a period of more stable and resilient growth.

"And while there are absolutely risks with inflation front -- first and foremost, this is what's most important, the United States is better positioned than any other major economy to bring inflation down and address these challenges without giving up all of the economic gains we've made, and that's because of the strength of our recovery.

"We have the strongest job market in modern history. Americans are getting back to work in jobs with higher pay. And that's meant that Americans can increase their savings, pay down their debt. Businesses are investing. Entrepreneurs are creating new businesses at record rates. And manufacturing is coming back to the United States at record rates as well. All of that progress--"

MacCallum interrupted, noting that "Americans feel like they are in a recession," then asking Deese the same question again:

"Well, what people should know is, we are in his period of transition to more stable growth, but people should also take confidence that we are better positioned than any other country to navigate through this and keep our recovery going," Deese said.

"Just this week there was an analysis out that said that the United States economy may grow faster this year than China's for the first time in decades. And, again, that's because we have more strength and resilience in our economic recovery than almost anywhere in the world."

A COVID outbreak has locked down parts of China's economy in recent weeks, and MacCallum raised that point with Deese, then asked him what the American people can do to weather the "transition."

"We understand that," he said:

"And that's precisely why the president has made very clear that combating inflation is his top economic priority.

"And what people should know is that we can do this. We know how to do this. First, we need to give the Federal Reserve the independence to do what it does. It has the tools to combat inflation.

"Second, we need to reduce costs and make things more affordable for families during this period. So, steps that we can take to reduce the cost of the Internet bills that families pay, or the prescription drug prices that they pay are really important right now.

"And third, we need to bring down the federal deficit. Because of the president's policies, we've made a lot of progress on that front, the deficit down $1.5 trillion already this year. But we need to make more progress on that as well. That will help produce price pressures in the economy.

"If we can do all of those things, then we can build on the historic strengths that we have here in the U.S. economy and we can navigate through to more stable growth that will generate better outcomes for families, because as your segment was just mentioning, we can't go back to a pre-pandemic economy where our supply chains are so vulnerable that something happens overseas and prices go up and people don't have access to things that they need.

"We need to build a more resilient recovery. We're on the way. We've got to focus on tackling inflation right now, and that's what this president's doing."

Electric cars are 'fun to drive'; 'People like them'

In South Korea on Sunday, President Biden said his administration "is going to stay laser-focused on innovation and batteries and EVs, building out our infrastructure and increasing the market demand."

He announced that Hyundai plans to spend more than $5 billion to build an electric vehicle plant near Savannah, Georgia.

"And thanks to Hyundai, we are being part of this transformative automobile sector and accelerating us on the road where we’re going to be handling [heading] to — the United States — an all-electric future.  And that’s what we’re shooting for," Biden said.

MacCallum asked Deese, "What does that mean, an all-electric future, and how soon?" She noted that many Americans would rather hear about an increase in the supply of gas and oil, to bring down prices at the pump:

"Well, what we're hearing from the president is we need to distinguish between the short term and the long-term," Deese said:

"In the short-term, this president has made clear that we need to increase the supply of oil on the market to blunt the impact of Putin's war in Ukraine and Russian supply coming off the market.

"But this president didn't wait and said, we're going to release oil from the strategic petroleum reserve, a million barrels a day between now and then to create a bridge.

“We want people to have those choices. It's better for the environment. These cars are -- are fun to drive. People like them. We want more of those cars built in the United States with secure supply chain so that we're not reliant on foreign countries and uncertain supplies.

“And we want to accelerate that process in a way that will be good for the American consumer.”