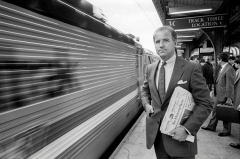 Then-Senator Joe Biden, seen here in 1988 on the Amtrak platform in Wilmington, Delaware, was a rail commuter for many years. (Photo by Joe McNally/Getty Images)

(CNSNews.com) - In a speech nominating his former political rival Pete Buttigieg as Transportation Secretary, President-elect Joe Biden mentioned some of his goals for a Biden Transportation Department, including a "railroad revolution."

Biden made his back-to-the-future comment as he talked about Buttigieg's tenure as mayor of South Bend, Indiana:

I know when you were mayor, Pete, when people would come in to try to decide whether they were going to build something in your area, they'd say where's the nearest railroad you have? What about the water access? What about--and so on.

This is going to attract businesses, jobs that lay the lines for the second great railroad revolution, which is--not only will slash pollution, but will slash commute times, open up investments in areas connected to metropolitan areas for the first time.

During his long tenure in the U.S. Senate, Biden was a regular Amtrak commuter. The train station in Wilmington is now named after him.

Biden said he selected Buttigieg to be transportation secretary "because the department is at the intersection of some of our most ambitious plans to build back better."

He said Buttigieg will help cities and states keep transit systems running for frontline and essential workers, help them "modernize their airports, their ports, their railways to attract and retain businesses and workers and to advance racial equality."

Biden's plan to expand transportation infrastructure includes repairing highways and "working with states, businesses, and labor to install 500,000 charging stations for the next generation of clean vehicles, smart grid system, reducing energy consumption and ushering in a clean energy economy all across America."

"We can own the electric vehicle market," Biden said. "We can put--with those 500,000 charging stations, we can put--we can put a million jobs back in Detroit and in the Midwest building cars."

Buttigieg, in accepting Biden's nomination, didn't have any solid transportation credentials to highlight, but he did say as mayor of South Bend, he "re-imagined how vehicles and people moved through the city.”

"My hometown, South Bend, Indiana was built by the power of American transportation from trade along the river whose bend gives our city its name, to the rail lines that connected us to the rest of the country back when we were considered the West...And now, climate and infrastructure innovation are helping bring my community into the 21st century," he said.

Buttigieg said infrastructure was "at the heart of our vision" when he became mayor of South Bend:

We re-imagined how vehicles and people moved through the city, unlocking new economic vibrancy in our urban core. We built up partnerships from a regional collaboration to improve rail service, to the public/private partnership that put our city at the cutting edge of bicycle mobility.

We developed new forms of support for lower wage workers and their commutes and added electric vehicle charging infrastructure to help prepare for a more sustainable future.

We also dealt with the challenges created by generations of often inadequate state and federal infrastructure funding. With just enough resources to replenish the paving of every lane-mile of street in our city only every 100 years or so -- I faced a constant battle with that natural enemy of all mayors -- the pothole.

And in a community where more than a quarter of our residents live in poverty, we worked to fill in the gaps that were created when underfunded transit resources left too many cut off from opportunity just because they didn't have the means to own a car.