Biden Going to Saudi Arabia, Looking for Help With Oil Production, But WH Downplays That Angle 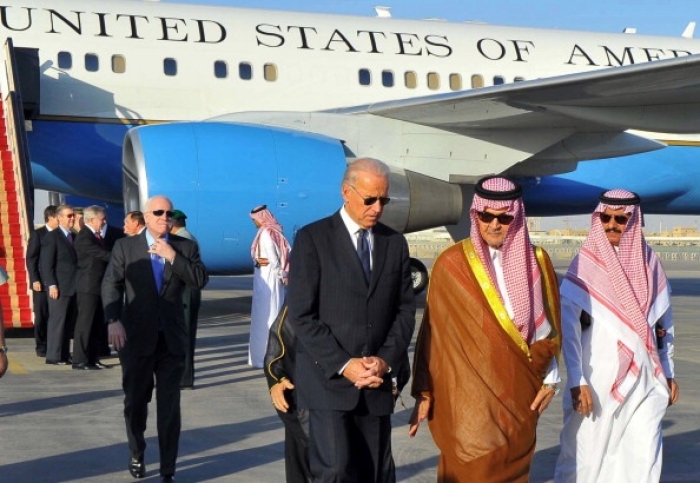 (CNSNews.com) - "Well, let me just say this," White House Press Secretary Karine Jean-Pierre said on Monday, after taking multiple questions on whether President Biden is or is not planning a trip to Saudi Arabia: "When the president is ready to make that announcement, that’s when we will," she said.

On Tuesday morning, the White House was suddenly ready: "President Joseph R. Biden, Jr. will visit the Middle East region from July 13-16 to reinforce the United States’ iron-clad commitment to Israel’s security and prosperity and attend a Summit of the Gulf Cooperation Council plus Egypt, Iraq, and Jordan (known as the GCC+3)," the announcement said.

"He will also meet with counterparts from across the region, to advance U.S. security, economic, and diplomatic interests." Those counterparts include Israel, Biden's first stop; then he'll go to the West Bank to "consult with the Palestinian Authority"; then to Jeddah, Saudi Arabia, which is chairing the GCC, a gathering of nine leaders from the region.

"While in Saudi Arabia, the President will discuss a range of bilateral, regional, and global issues," the announcement said.

"These include support to the UN-mediated truce in Yemen, which has led to the most peaceful period there since war began seven years ago. He will also discuss means for expanding regional economic and security cooperation, including new and promising infrastructure and climate initiatives, as well as deterring threats from Iran, advancing human rights, and ensuring global energy and food security.

"The President looks forward to outlining his affirmative vision for U.S. engagement in the region over the coming months and years."

The pushback came quickly, given U.S. concerns about Saudi Arabia's human rights record and the regime's murder -- reportedly on orders of Saudi Crown Prince Mohammed bin Salman -- of Jamal Khashoggi, a Saudi journalist and Washington Post columnist killed, dismembered and disposed of after entering the Saudi consulate in Turkey in 2018.

Appearing on CNN's "New Day," Sen. Dick Durbin (D-Ill.) said he respects President Biden, and "I know he has a tough job dealing with gasoline prices, trying to find ways to find new sources and supplies to bring down inflation in the energy sector, and Saudi Arabia is a major player, full stop.

"Next point I want to make is that the Saudi Arabia record, particularly when it comes to Khashoggi, is an outrage. It is the type of thing that clearly it was a designed murder, in an effort to dispose of the corpse in a way that it could never be discovered," Durbin said.

"We now know what happened at least to a large extent, and to say that's the ordinary course of business for a government is outrageous. So I have mixed feelings on this, and if the president called me, I'd say, Mr. President, you can't trust these people. Their standards are not our standards, their values are not ours."

"You would tell them not to go?" host John Berman asked:

"I would give them that counsel," Durbin said. "But I understand why he's trying to balance this. America is hopeful he's successful in getting more oil into the pipelines, so we could reduce the price of gasoline and energy."

Next up on "New Day" was John Kirby, the former Defense Department spokesman who now works for Biden's National Security Council:

"He's going over there as part of the GCC+3 to talk about counterterrorism, Iran's destabilizing behavior, certainly energy production as well as trying to end this war in Yemen," Kirby said. "He'll talk with nine heads of state, there'll be lots of bilateral discussions and yes, that will certainly include King Salman and his leadership team, and we would expect that the crown prince will be part of those discussions. We're not shying away from that."

Host Brianna Keilar noted that Biden, while campaigning for president in 2019, said that Khashoggi "was in fact murdered and dismembered, and I believe on the order of the crown prince. And I would make it very clear we were not going to in fact sell more weapons to them. We were going to in fact make them pay the price and make them in fact the pariah that they are. There's very little social redeeming value of the -- in the present government in Saudi Arabia."

So how does Biden "justify this visit?" Keilar asked Kirby:

"Look, Brianna, when the president became president, he made public the intelligence community's report about the Khashoggi killing. He put in place a series of accountability measures. And he said that we needed to recalibrate, reorient our relationship with Saudi Arabia, and we've worked on that. The other thing we need to remember is that Saudi Arabia is a key partner in the region, on things like counterterrorism, on the war in Yemen, on energy production.

"There is a lot of national interest here at stake in this trip, and it's not just about Saudi Arabia, it is not just even about the Gulf Region. It is, as you said in the opening, about Israel and the West Bank and meeting with the Palestinian Authority leaders. I mean, there is a lot of lift here that the president wants to do on behalf of the American people when it comes to our national security."

"Would he be holding official talks with MBS if gas was not at $5 a gallon?" Keilar asked:

"The president will, and he's said this before, he will meet with leaders across the world if it is in the best interest of the American people, if it is in our national security interest, and he believes this trip in its entirety, all the discussions he's going to be having over the course of the three days, fits that bill.

Kirby added that Biden "respects there's different views about this trip. He understands that. But he also understands his responsibilities to the American people. On a range of national security issues, and we've  already talked about several of them. That's what this trip is all about."

Kirby also said the president "of course will be talking about a range of human rights issues, too. We always talk about human rights when we go and we visit counterparts around the world.