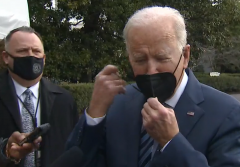 President Biden takes off his mask to speak to reporters about the prospects of a Russian invasion of Ukraine. (Photo: Screen capture)

(CNSNews.com) - President Joe Biden, departing the White House for Cleveland on Thursday morning, told reporters gathered outside that the threat of a Russian invasion of Ukraine is "very high."

"My sense is it will happen within the next several days."

Biden also said he has not yet read a letter from Russia, responding to his own letter that laid out security guarantees.

Among other things, Russia is demanding that the United States rule out NATO membership for Ukraine. Biden has refused to do that.

Speaking to reporters with his mask off for a change, Biden said Russia has not moved any of its troops away from the Ukraine border. "They have moved more troops in, number one. Number two, we have reason to believe that they are engaged in a false-flag operation to have an excuse to go in.

"Every indication we have is they are prepared to go into Ukraine, attack Ukraine, number one. Number two, I've been waiting for a response from Putin from my letter and my response to him. It's coming from Moscow...they're sending it here. I have not read it yet. I cannot comment on it."

Biden said diplomacy is still an option: "That's why I asked Secretary Blinken to go to the United Nations to make a statement today. He'll lay out what the path is. I have laid out a path to Putin as well on Sunday. So there is a path. There is a way through this."

"Are you going to call Putin?" a reporter asked Biden.

"I'm not calling Putin. I have no plans to call Putin right now," the president said.

Biden is going to Ohio to plug his Build Back Better agenda that is now stalled in the Senate.