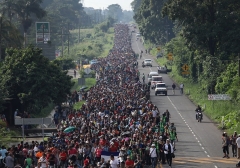 President Trump blocked aid to Central American countries because of scenes such as this caravan making its way to the Southwest border. (Photo by John Moore/AFP via Getty Images)

"Number one is, we deal with root causes, which has not been dealt with in the past," Menendez told MSNBC on Thursday. "When President Trump eliminated all of the assistance that we had built into Central America, he eliminated the ability to stop the root causes of why people flee."

Biden's bill would send $4 billion to Central American countries over four years, conditioned on the ability of Honduras, El Salvador and Guatemala "to reduce the endemic corruption, violence, and poverty that causes people to flee their home countries."

So Biden would end corruption by sending billions of dollars to corrupt governments.

Menendez explained it this way:

I mean, if you are in Central America, and you are a parent, and your choice is to stay and see a member of your family die or see your son forcibly put into a gang or your daughter raped, you are going to flee. And that's the reality that we have been facing.

This plan calls for four-year investment into Central America, assuming they meet standards on the whole rule of law, on dealing with corruption and dealing, of course, with the root causes of what drives people. That's one big difference.

The other big difference is that we also give people a safe and legal process to apply for their immigration potential, whether it be on asylum status or some other status of the law, in country, so that we don't have them fleeing and taking the dangerous trek up north and coming to our border.

And then it deals with, how do people get dealt with once they may show up at the border and be able to make their claims for asylum? Some will be rejected, and others will be approved. But that's totally different than what we had from the (previous) administration.

President Biden and other Democrats, including Menendez, have admitted that the comprehensive bill may have to be broken into smaller pieces to get through Congress:

"[U]nless we change the dynamics of, first of all, the root causes, the push-and-pull factors, unless we deal with a process to normalize and regularize our immigration system, unless we deal with the 11 million who are in the country undocumented, and find a way to have them make themselves right with the law, these challenges will only exacerbate themselves," Menendez said.

"So, I would say, while the legislation is comprehensive, it's our vision of what we would like to achieve in immigration reform, but we're going to be looking at what can we get done, how robustly we can make different elements of the legislation happen.

"And we will certainly be reaching out to our colleagues on both sides of the aisle, and especially border communities, so they understand what is in the legislation that actually helps them most specifically on the front lines."

One Democrat representing a border community in Texas already has expressed concern about illegal immigrants crashing the border in huge numbers.

In a Feb. 10 news release, Rep. Vincente Gonzales warned of the impending influx, saying, "A disorderly rushing of our border is not acceptable."

"With the suspension of the ‘Safe Third Country Agreements’, the Biden administration must offer a more clearly communicated and defined option for individuals to apply for asylum from their home or neighboring countries. Migrant caravans approaching our southern border will overwhelm our many unvaccinated Customs and Border Patrol agents and put our frontline workers at greater risk during the COVID-19 pandemic," Gonzales said.

"In the long term, we must continue to make thoughtful investments in the Northern Triangle that boost their economies, create jobs, lower crime and incentivize their populations to remain in their home countries. Until this is accomplished in a meaningful way, we will continue to feel the stress on our southern border."