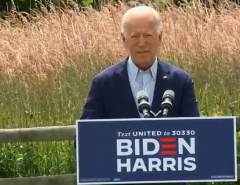 "We need a president who respects science," Biden said, proclaiming himself to be that person.

"I want you to know that if you give me the honor of serving as your president, we can and we will meet this moment with urgency and purpose. We can and we will solve the climate--the climate crisis, and we'll build back better than we were before."

Biden then made a number of promises to build "a stronger, more climate-resilient nation." Those promises include installing 500,000 electric vehicle charging stations along U.S. highways and "buying electric vehicles that are made and sourced by union workers right here in the United States of America."

"And we'll do another big thing," Biden promised. "I'll put us on a path to achieve a carbon pollution-free electric sector--electricity sector by 2035 that no future president can come along and turn back. Transforming the electrical sector to produce power without carbon pollution. That will be the greatest spur to job creation and economic competitiveness in the 21st century, not to mention the positive benefits to our health and our environment."

Here is a partial transcript of Biden's speech, in which he warned, again, that "we are not safe in Donald Trump's America."

When Donald Trump thinks about renewable energy, he sees windmills somehow as causing cancer. I see American manufacturing, American workers racing to lead the global market. I see farmers making agriculture the first in the world to achieve net zero emissions and in the process, in gaining new sources of income.

When Donald Trump thinks about LED light bulbs, he says he doesn't like them because the lights are no good. They always make him look orange. I see small businesses and master electricians designing and installing award-winning energy conservation measures rebuilding buildings across the country that's going to reduce electrical consumption and say business is hundreds of thousands of dollars a year in energy costs.

While he turned against our allies, I'll bring us back into the Paris Agreement. I will put us back in the business of leading the world on climate change and I will challenge every other country to up the ante on climate commitments. Where he reverses the Biden, excuse me, the Obama-Biden fuel efficiency standards, he picks big oil...companies over American workers, even when the automobile industry agreed.

I'll not only bring--I'll not only bring the standards back, I'll set new ambitious ones there are our workers are ready to meet. I'll also see American workers building and installing 500,000 electric vehicle charging stations along our newly engaged infrastructure programs and highways all across the country. I see American consumers switching to electric vehicles through rebates and initiatives.

Not only that, the United States owns one of the--and maintains one of--an enormous fleet of vehicles and we're going to harness the purchasing power of our federal government to make sure we're buying electric vehicles that are made and sourced by union workers right here in the United States of America. And together, this will mean more than a million new jobs in the American auto industry.

You know--and we'll do another big thing. I'll put us on a path to achieve a carbon pollution-free electric sector--electricity sector by 2035 that no future president can come along and turn back. Transforming the electrical sector power to produce power without carbon pollution. That will be the greatest spur to job creation and economic competitiveness in the 21st century, not to mention the positive benefits to our health and our environment.

We need to get to work right away. We'll need scientists at the national labs and land grant universities, historic black colleges and universities to improve and innovate technologies needed to generate, store, and transmit this clean electric. We need engineers to design and workers to manufacture these new products.

We'll need iron workers and welders to install them. We'll need to become the world's largest exporter of these technologies creating even more jobs sourced in America. We know how to do this. The Obama-Biden administration rescued the auto industry and helped them retool. We made solar energy cost competitive with traditional energy and weatherized more than 1 million homes. This is just the beginning if we get reelected.

And we'll do it again bigger and faster and better than before. We'll also build 1.5 million new energy efficient homes and public housing units that will benefit our communities and three times over by eliminating affordable housing crisis, by increasing energy efficiency, and by reducing the racial wealth gap linked to homeownership.

There are thousands of oil and natural gas wells that oil companies and gas companies have abandoned, many of which are leaking toxins. We can create 250,000 jobs it now by just plugging those wells right away. Good union jobs for energy workers. This will help sustain communities and protect them from the environmental damage as well.

We'll also create new markets for our family farmers and ranchers. We'll launch a new modern civilian climate core to heal our public lands and make use of us less vulnerable--make us much less vulnerable to wildfires and floods. I believe that every American has a fundamental right to breathe clean air and drink clean water. I know that we haven't fulfilled that right yet.

Fulfilling this basic obligation to all Americans, especially in low income white, black, Brown, and Native American communities who too often don't have the clean air and clean water is not going to be easy, but is necessary, and I'm committing to get it done. These aren't pie-in-the-sky dreams. These are concrete, actionable problems that create American jobs, mitigate climate change, and put our nation on the road to net zero emissions by no later than 2050.