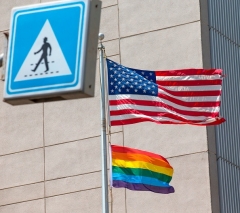 The gay pride flag is raised alongside the American flag at the US embassy in Tel Aviv on June 13, 2014. (Photo by JACK GUEZ/AFP via Getty Images)

(CNSNews.com) - At his January confirmation hearing, now-Secretary of State Antony Blinken said the United States should be "standing up for and defending the rights of LGBTQI people." He said it was something the Biden State Department "is going to take on, and take on immediately."

"Will you ensure that ambassadors are able to fly the gay pride...flag at our embassies once again around the world?" Sen. Ed Markey (D-Mass.) asked Blinken at that hearing.

And here we go: The New York Times, citing a State Department cable, reported on Friday that Blinken has authorized U.S. embassies and consulates to fly the rainbow flag beneath the American flag on the same flagpole.

According to the Times:

The action reversed a decision by the Trump administration, which rejected requests from embassies to raise it on their flag poles during the month of June, which in the United States and many other countries is Pride month.

According to the cable and a State Department official, Mr. Blinken authorized diplomats to fly the pride flag before May 17, which is the International Day Against Homophobia and Transphobia, and to continue their display at diplomatic outposts through the month of June.

In the cable, Mr. Blinken noted that it was not a requirement and gave chiefs of mission the ability to "determine that such a display is appropriate in light of local conditions."

At Friday's State Department press briefing, a reporter asked deputy spokeswoman Jalina Porter if she had "any additional information about the cable that Secretary Blinken sent out regarding pride flags at the U.S. embassies and consulates and if you can confirm any further details about that."

"I just want to start off by saying that Secretary Blinken is committed to the rights and prosperity of our LGBTQ+ community, both our employees at State and all around the world," Porter responded.

"When it comes to the cable that you mentioned, of course, the department issues pride guidance to our missions on a regular basis, and pride displays at overseas facilities actually don’t require Washington approval. However, flying a flag over the Foreign Service – from the same flagpole as the U.S. actually doesn’t require approval as well.

"In prior years, the department has issued a blanket authorization or requested that posts request permission from Washington to fly a pride flag from the same flagpole as the U.S. flag."

That's all she said.

Beginning in 2014 under the Obama administration, The Guardian reported, "Diplomats will take part in parades and some embassies will fly the rainbow flag along with the Stars and Stripes."

In June 2019, Vice President Mike Pence told NBC News, "I’m aware that the State Department indicated that on the flagpole of our American embassies, that one flag should fly, and that’s the American flag, and I support that."