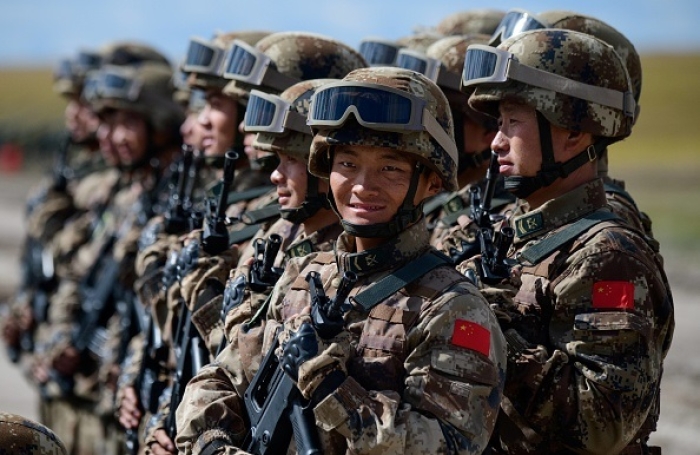 Chinese troops parade at the Vostok-2018 (East-2018) military drills near the borders with China and Mongolia in Siberia, on September 13, 2018. (Photo credit should read MLADEN ANTONOV/AFP via Getty Images)

(CNSNews.com) - For the first time in four years, Chinese troops will go to Russia to take part in joint military exercises beginning Aug. 30 and running through Sept. 5. The exercises also include India, Belarus, Mongolia, Tajikistan and other countries, China’s defense ministry said Wednesday.

And on Wednesday, a State Department spokesman shrugged off the China-Russia military cooperation:

"My understanding is that these are joint exercises that involve a number of countries well beyond Russia and China," Ned Price told reporters:

"Countries routinely make their own sovereign decisions. It is absolutely their right to do so regarding what, if any, military exercises to take part in. I’ll also note that most of the participating countries also routinely participate in a wide array of military exercises and exchanges with the United States as well. So we don’t read anything into their engagement in this activity.

"Now, the broader point is that we have seen a burgeoning relationship, including in the security realm, between the PRC (People's Republic of China) and Russia. We’ve seen a burgeoning relationship between Russia and Iran, for example, and we have made public elements of that. That is of concern because of the vision that the PRC, countries like the PRC, countries like Russia, have for the international order.

"It is a vision that is starkly at odds to the liberal vision that we and our allies and partners have for the international system. It is starkly at odds with the underpinnings of the international system that have been in place for some eight decades following the end of the Second World War, a system that has undergirded unprecedented levels of stability, of security, of prosperity across the world..."

"Again, this is Joe Biden's long-standing record of weakness and appeasement going back not just the last 18 months, but the last 50 years of public life," Cotton told Fox News's Laura Ingraham Wednesday night:

"Remember, he was celebrating China's rise for decades, even before he had reason to do so to help his son out in business. He also criticized Ronald Reagan for saying that Russia was an evil empire or for fighting communists in places like Nicaragua or Cuba.

"This is who Joe Biden is. He believes that America is not exceptional -- that America should not be the leader of the free world. That we should not stand proudly defending our interests and advancing the cause of our freedom around the world, and they take advantage of it.

"Just like Vladimir Putin did in Ukraine, just like China has started to in the last month, running all of these war games around Taiwan shores.

"And you look at what is happening in Iran, Joe Biden still trying to get into another nuclear deal with Iran at a time when Iran finally was able to attempt murder against Salman Rushdie after 30 years on American soil and humiliation of America. This is who Joe Biden is though, it's who he's always been."