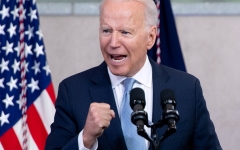 President Joe Biden gestures as he speaks about voting rights at the National Constitution Center in Philadelphia, Pennsylvania, July 13, 2021. (Photo by SAUL LOEB/AFP via Getty Images)

(CNSNews.com) - "There's an unfolding assault taking place in America today, an attempt to suppress and subvert the right to vote and fair and free elections," President Joe Biden claimed on Tuesday. "An assault on democracy, an assault on liberty, an assault on who we are, who we are as Americans."

Biden, who ran for president on a "unity" platform, attributed racial motives to the "onslaught of state laws" that he said are "undermining voting rights in old and new ways."

Speaking in support of the Democrat plan to federalize elections -- and relax the rules that prevent cheating -- Biden told a group in Philadephia he's doubling the size of his voting rights division to dismantle "racially discriminatory laws," such as "Georgia's vicious anti-voting law."

He also blasted Texas legislation, now pending in a special session of the state legislature, which would actually expand the number of voting hours:

"Civil rights groups and other organizations have announced their plans to stay vigilant and challenge these odious laws in the courts," Biden said:

In Texas, for example, Republican-led state legislatures wants to allow partisan poll watchers to intimidate voters and imperil--and impartial poll workers. They want voters to drive further and be able to be in a position where they wonder who's watching them and intimidating them, to wait longer to vote, to drive a hell of a lot--excuse me, a long way to get to vote.

They want to make it so hard and inconvenient that they help people don't vote at all. That's what this is about. This year alone, 17 states have enacted, not just proposed but enacted, 28 new laws to make it harder for Americans to vote, not to mention, and catch this, nearly 400 additional bills Republican members of the state legislatures are trying to pass.

The 21st-century Jim Crow assault is real. It's unrelenting. And we're going to challenge it vigorously.

According to the "Texas Tribune," the pending bills in Texas would do the following:

-- Set new ID requirements for absentee ballots so voters must provide their driver’s license number, or if they don’t have one, the last four digits of their Social Security number on applications for those ballots. For their votes to be counted, voters will be required to include matching information on the envelopes used to return their ballots.

-- Create a new correction process for mail-in ballots that are ordinarily rejected because of a missing signature;

-- Set up a monthly review of the state’s voter rolls to identify noncitizens;

-- Enhance poll watcher protections by granting them “free movement” within a polling place, except for being present at a voting station when a voter is filling out their ballot. Both chambers also want to make it a criminal offense to obstruct their view or distance the watcher “in a manner that would make observation not reasonably effective.”

Biden on Tuesday called the Texas law a "broad assault against voting rights."

He said the "target" of state voting integrity laws is "the people who did not vote for them (Republicans)".

"We must ask those who represent us at the federal, state, and local levels, will you deny the will of the people? Will you ignore their voices? We have to ask, are you on the side of truth or lies, fact or fiction, justice or injustice, democracy or autocracy? That's what it's coming down to, which brings me to perhaps the most important thing we have to do.

"We have to form--forge a coalition of Americans of every background and political party, the advocates, the students, the faith leaders, the labor leaders, the business executives to raise the urgency of this moment, because as much as people know they are screwing around with the election process, I don't think that most people think this is about who gets to count what vote counts literally, not figuratively."

Biden said the next test will be the midterm elections in 2022, when "a new wave of unprecedented voter suppression and raw and sustained election subversion.

"They will decide, and the power must always be with the people.

"That's why just like we did in 2020, we have to prepare for 2022. We'll engage in an all-out effort to educate voters about the changing laws, register them to vote, and then get the vote out. We'll encourage people to run for office themselves at every level.

"We'll be asking my Republican friends in Congress, in states and cities and counties to stand up, for God's sake, and help prevent this concerted effort to undermine our election and the sacred right to vote."