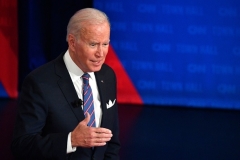 (CNSNews.com) - At a CNN town hall Thursday night, President Joe Biden said the United States will come to Taiwan's defense if China attacks what it considers to be a renegade province.

Someone in the audience asked Biden: "China just tested a hypersonic missile. What will you do to keep up with them militarily and can you vow to protect Taiwan?"

Host Anderson Cooper followed up: "So are you saying that the United States would come to Taiwan's defense if China attacked?" he asked Biden.

But the United States no longer has a formal defense treaty with Taiwan. Then-President Jimmy Carter ended it in 1979.

In that same year, Congress passed the Taiwan Relations Act, which expresses the "the expectation that the future of Taiwan will be determined by peaceful means," but does not explicitly obligate the United States to come to Taiwan's defense.

Among other things, the act authorizes the U.S. to provide Taiwan with defensive arms; it declares that "peace and stability" are "matters of international concern"; and it maintains "the capacity of the United States to resist any resort to force or other forms of coercion that would jeopardize the security, or the social or economic system, of the people on Taiwan."

CNN reported that a White House official later clarified Biden's remarks, "saying the President was 'not announcing any change in our policy and there is no change in our policy...The U.S. defense relationship with Taiwan is guided by the Taiwan Relations Act. We will uphold our commitment under the Act, we will continue to support Taiwan's self-defense, and we will continue to oppose any unilateral changes to the status quo,'" CNN quoted the White House official as saying.