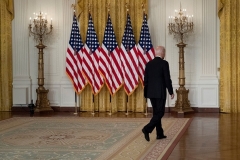 President Joe Biden walks away without taking questions after speaking about the Taliban's takeover of Afghanistan on August 16, 2021. (Photo by BRENDAN SMIALOWSKI/AFP via Getty Images)

(CNSNews.com) - President Biden turned and walked away from the podium on Monday without taking any questions on the unfolding crisis in Afghanistan -- a crisis that brought him back to the white House for a just a few hours, interrupting his planned vacation at Camp David.

By Wednesday, Biden was back at the White House.

Except for a (heavily edited) interview with ABC's George Stephanopoulos on Wednesday -- and remarks strictly on COVID that same day -- Biden has not made any comments or taken any questions from the White House press corps regarding a matter of serious national security concern.

But, said Biden's communications director on Friday -- "The president never shies away from taking questions."

This afternoon, President Biden will once again address the nation on the dire situation in Afghanistan.

MSNBC's Willie Geist asked Kate Bedingfield on Friday: "Will President Biden, after his remarks today take questions? He's given a couple of speeches, he did the interview with ABC news, but the white house press core and the American people have a lot direct questions for him. Will he take those today?"

There was no pushback on Bedingfield's insistence that Biden "never shies away from taking questions."

Even corporate media types have noted Biden's reluctance to deal with the press:

“That is not something we recommend,” Psaki said. “In fact, a lot of times we say 'Don't take questions.'"

Psaki added, "He’s going to do what he wants to do, because he’s the president of the United States.”