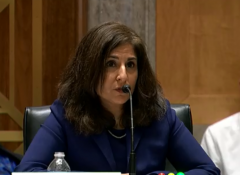 (CNSNews.com) - President Joe Biden's nominee to head the White House Office of Management and Budget apologized on Tuesday for some of her partisan, inflammatory and insulting remarks directed at Republicans with whom she now must work.

"I recognize the concern," Neera Tanden, a long-time activist of a leftist think tank, told her confirmation hearing.

I deeply regret and apologize for my language and some of my past language. I recognize that this role is a bipartisan role, and I know I have to earn the trust of senators across the board. I will work very aggressively to -- to meet that concern.

I know the last four years, or last few years, have been pretty polarizing. And I hope that we can work to address the country's challenges in a bipartisan and nonpartisan manner.

I appreciate that it's upon me to prove that to this committee and to members, and I will work as hard to address the concerns of Republican senators as Democratic senators and will be accountable. I want the OMB to be accountable to Congress and work effectively with you.

Tanden was responding to Sen. Rob Portman (R-Ohio), who expressed concern that "the tone, the content, the aggressive partisanship" of Tanden's public statements "have added to the troubling trend of more incivility and division in our public life."

Portman said her personal attacks on Republican senators will make it difficult for her to work with them.

Portman read just a few of her "thousands of negative public statements."

"You wrote that Susan Collins is, quote, 'the worst.' That Tom Cotton is a fraud. That vampires have more heart than Ted Cruz. You called Leader McConnell Moscow Mitch and Voldemort. And on and on."

Sen. Portman also asked Tanden about media reports that she deleted more than 1,000 of her public statements and tweets in November, after the election. "Why?" Portman asked her.

Portman asked Tanden if she deleted the offensive tweets because she thought she might be nominated to serve in the Biden administration.

Tanden avoided a direct answer: "I deleted tweets over many months because I regretted the tone of my tweets," she repeated.

Portman asked her if trying to hide what she's said is "the right thing to do." He also noted that "there are still a lot of harsh, partisan tweets on your account," including "nine pages of tweets about Sen. Ted Cruz."

"How did you choose which tweets you want to delete and which ones you wanted to keep on your account?" Portman asked her.

"Senator, I mean, I just thought of some of my language and deleted my tweets. But I would also just say, again, that to the extent people are hurt by my language, I deeply apologize."

The Center for American Progress, which Tanden most recently served as president and CEO, says it is "dedicated to improving the lives of all Americans, through bold, progressive ideas, as well as strong leadership and concerted action. Our aim is not just to change the conversation, but to change the country."