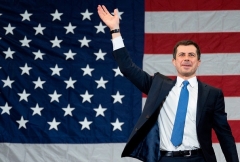 (CNSNews.com) - Even if the Senate remains in Republican control, "the thing we have going for us is that the American people are with us," South Bend Mayor Pete Buttigieg told "Fox News Sunday."

Nevertheless, Buttigieg said Joe Biden "has a mandate to deliver on the winning campaign agenda that the Biden-Harris ticket offered the country."

This not only earned the support of a majority of Americans who voted for him to be the next president, but also, we should remember that those who supported him and a remarkable number of President Trump supporters support the agenda that Joe Biden is going to lead our country forward with.

In other words, the idea of getting serious on COVID and having a science-led approach, which he's already underway on. The idea of raising wages and protecting workers, and making sure corporations and the wealthy pay their fair share in taxes, taking climate seriously, doing something about racial justice.

As we look forward, whether we have divided government or not, I know this -- what Joe Biden wants for the country is what most Americans believe is right for the country, and that I think is where the real propulsion of his administration will be, just as it's been the propulsion of the campaign and led to this win.

Host Chris Wallace noted that Republicans are "likely" to retain control of the Senate, pending the outcome of two runoff elections in Georgia on January 5: "Isn't that really going to hurt some of the boldest parts of the Biden agenda?" Wallace asked:

Buttigieg said he expects Democrats "can very well take the majority in the Senate" with the two "competitive" Georgia runoff elections on January 5:

If that doesn't happen, at the end of the day, again, the thing we have going for us is that the American people are with us. We're not just talking about the House of Representatives and the White House, we're also talking about the strong majority of the American people and even stronger majority than the one that brought Joe Biden to office, when we talk about some of the things you just mentioned -- making sure the corporations and the wealthy pay their fair share, making sure that we expand access to health care.

And so, the McConnell caucus, the Republican caucus in the Senate will have to decide whether it wants to continue facing down the American people and standing in a way of what America wants, which I think would be a decision strategically to make the Republican Party a party of minority rule, or is there a willingness to reach across the island get something done?

Now, if we know one thing about President-elect Biden is that he 's somebody who has that instinct, of getting things done, reaching across the aisle, especially in a place like the Senate, and I think that's going to be exactly the Senate attributes that will be so important to getting anything done at all.

Wallace pointed to the "checks and balances" created by the Founders. A Republican Senate would say, "there was no public mandate" for the Biden-Harris agenda, because "the country allowed us to retain the Senate."

"Yeah, the structure of the Senate is such, for better or for worse, that you can have a Senate majority that disagrees with the majority of the American people," Buttigieg said.

"But then Mitch McConnell's going to have a decision. Is his purpose in Washington to defy the American people, who along with the president and the House of Representatives will believe in expanding, not taking away health care, ensuring that the wealthy pay their fair share in taxes instead of slashing their taxes no matter what, raising wages, treating climate change as real?

"In other words, Mitch McConnell is going to have to decide whether he wants to help move this country forward and influence progress or whether he wants to stop progress. If he chooses to do that, I'm fearful not only that the Republican Party would pay a devastating price politically, but that the American people would pay a price that we can't afford to pay, because we need action."