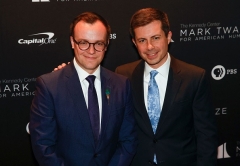 Secretary of Transportation Pete Buttigieg and his husband Chasten at the Kennedy Center in Washington on April 24, 2022. (Photo by SAMUEL CORUM/AFP via Getty Images)

(CNSNews.com) - "Yeah, this is very personal for us," Pete Buttigieg said on Sunday when he was asked about the U.S. baby formula shortage.

The Transportation Secretary and his husband are raising twins, a boy and a girl.

"Baby formula is a very big part of our lives. And like millions of Americans, we've been rooting around stores, checking online, getting in touch with relatives in other places where they don't have the same shortages to see what they can send over. And we figured it out. We're all set, at least for now.

"But I think about what that would be like if you're a shift worker with two jobs, maybe you don't have a car. You literally don't have the time or the money to be going from store to store. That's why this is such a serious issue. And that's why it's getting attention at the highest levels, including, of course, direct involvement by the president."

On Friday, President Biden was asked if he should have acted sooner to address the shortage: "If we’d been better mind readers, I guess we could have," Biden said. "But we moved as quickly as the problem became apparent to us, and we have to move with caution as well as speed."

But according to Buttigieg, "the administration acted from day one after the (Abbott) recall, taking steps like creating more flexibility for the WIC program to help rebalance the availability of formula in the states. There are more actions that are underway, including looking at imports.

"But, fundamentally, we are here because a company was not able to guarantee that its plant was safe. And that plant has shut down."

Buttigieg noted that the Food and Drug Administration is now working with Abbott's plant in Sturgis, Michigan, to improve its production and safety procedures.

"It's got to be safe and it's got to be up and running as soon as possible," Buttigieg said, noting that the administration is working with other baby formula manufacturers to surge their production.

Buttigieg said the formula shortage is a supply problem, not a supply chain problem: "So, a shortage of ingredients is not what led to the shutdown of the facility, right?" He said the United States "has the productive capacity to create the baby formula that we need."

Buttigieg said the government should look into the fact that four companies make about 90 percent of the formula in this country. "I mean, it's basically a series of monopolies that have added up into enormous market concentration.

But host Margaret Brennan told Buttigieg, "This isn't just a private sector problem...The federal government is directly involved in some of these arrangements,” including supplying formula for the Women, Infants and Children welfare program.

According to the White House, "About half of infant formula nationwide is purchased by participants using WIC benefits, based on both federal requirements and additional rules set by individual states that have a large effect on the availability and distribution of infant formula in a given state."

The White House says it will continue to "monitor" the situation.