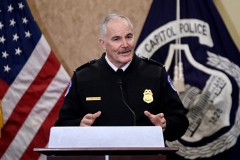 (CNSNews.com) - Capitol Police Chief Tom Manger, who became chief six months after the January 6 attack on the U.S. Capitol, told Congress on Wednesday that he expects Capitol security to be "tested again."

But unlike the situation last January 6, when "we just weren't prepared the way we should have been," Manger said, "the next time that we're tested, we will not be making those same mistakes."

Sen. Ted Cruz (R-Texas) asked Manger, "With the benefit of hindsight, what could have been done to better secure the Capitol, to stop the riot outside and prevent them from penetrating as far as they did?"

So I think that clearly documented intelligence failures -- there were leadership failures within the Capitol Police Department. If folks had -- if the intelligence had been acted on the way it should have been, and we would have had enough people here, I think it would have been a different story.

And that's one of the things -- one of the changes that we put into place is that, with a few phone calls, I can get double or triple the number of police officers we have -- trained, equipped police officers here to assist us in our responsibilities to protect the Capitol and protect the members of Congress.

But what will be different is that we will be paying much more attention to the information that we gather ahead of time, we will be putting together a better plan, we will be getting the help that we need, pre-planned, here on campus, before we need it, not making panicked calls later on.

And I say that not in any way to criticize the folks who were here on the sixth. They had a very difficult challenge. And I frankly have not been looking behind me. I am looking forward about what we need to do to make the changes.

But clearly, when you look at the recommendations, when you look at what happened, we were -- we didn't have the people, we didn't act on the intelligence, and we just weren't prepared the way we should have been. And that's going to change -- that has changed, and the next time that we're tested, we will not be making those same mistakes.

A short time later, Manger told Cruz, "Prior to the sixth, we were not sharing information the way we should be. And we were not disseminating it to our own people..."

Manger said that has changed.