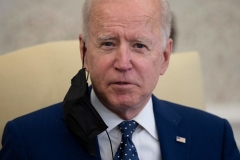 Wallace spent most of the interview discussing a potential deal on infrastructure. Then, at the end, he turned to Cornyn, putting up a tweet Cornyn issued on April 12:

"I want to end on this subject," Wallace told Cornyn. "I want to put up a tweet that you sent out this week. Here it is."

The president is not doing cable news interviews. Tweets from his account are limited and, when they come, unimaginably conventional. The public comments are largely scripted. Biden has opted for fewer sit down interviews with mainstream outlets and reporters.

Invites the question, is he really in charge?

Wallace told Cornyn, "My question, I guess, is -- is that helpful to be sending out a tweet questioning the -- President Biden's mental faculties?"

"Well, Chris, thank you for the question," Cornyn replied, "because I think there's been a lot of confusion in the twitterverse about that. That actually was a quote from a "Politico" story that I pasted into a tweet and then I simply asked a question.

"What I'm trying to do is reconcile the Joe Biden we heard from on January the 20th, the Joe Biden that many of us know of his previous service in the -- in the United States Senate, from the Joe Biden we're seeing now jamming through $1.9 trillion of spending bills.

"You know, I've learned in Washington, you not only need to listen to what people say, you need to watch what they do. And so far there's a conflict that I'm trying to reconcile, and I bet I'm not the only one," Cornyn said.

Wallace followed up: "But, just real quickly, do you have questions as to whether Joe Biden is really in charge and whether, frankly, he's up to the job?"

Cornyn was defensive: "I'm -- that -- that tweet was not meant to suggest anything about the president's competency, or physical or mental. I know some people have suggested that. It certainly wasn't my intention.

"I'm glad we cleared that up," Wallace said, ending the interview.

Message to viewers: It's not okay to question Biden's mental competency when it was not only okay -- it was imperative -- for Democrat partisans to question President Donald Trump's.