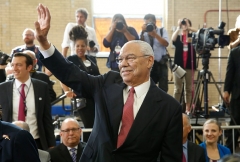 (CNSNews.com) - In a "bash Trump" interview with CNN, General Colin Powell, who held high-ranking positions in both Bush administrations, also criticized Congress, the Trump Cabinet, and the police response to the storming of the U.S. Capitol.

"It was a total failure as a military or as a police operation," Powell said of the police response. "We can't keep our Capitol building that unguarded."

Invited by CNN's Wolf Blitzer to view the Capitol police response through a racial lens, Powell declined: "I am not prepared to make that judgment that it was black and white and white and black...You have to be careful."

(Notably, President-elect Joe Biden is among the Democrats -- many in the media -- insisting that the Capitol police response would have been more violent if the mob storming the Capitol had been mostly black.)

Powell said he watched Wednesday's attack on the Capitol on television:

You know, for the first couple of hours I saw people milling around outside. And I said well, maybe it's not going to be as bad as I thought. And then suddenly they all started attacking the building. And I saw people going up the steps of that patio. And they went right through the door.

And there was a huge crowd on that porch -- patio -- for hours. I said what is going on. And only then could I see pictures coming out of it. And what was going on was the hundreds had gone through. They were running around the inside of the capitol building destroying things. And we did not have a police force in there who could handle it. That's what I don't understand. Where was the police force? Where were -- the National Guard had not been called up yet.

And I heard reports that some of these folks would be coming in to do service but they won't be armed. So there's something wrong with the whole planning system. And we have to sort this out. We can't have this happen. We can't keep our Capitol building that unguarded.

"And I'm not sure what instructions were given to the police and the others there. Because when they got into the building, they tolerated a lot of destructive activity. They just tolerated a lot of things I would not have said would be tolerated.

"And so this is an operation that is going to require in the future the most serious examination, because I found it to be totally lacking in terms of its military ability, its police ability," and in the intelligence failure that went along with it."

Host Wolf Blitzer brought up the race card, as Biden and many liberals have done as well: "Yesterday, this largely white mob made it in and out of the Capitol with only a handful of individuals arrested. Hundreds if not a few thousand should be arrested. How do you explain that?" Blitzer asked.

"I don't know that I can explain it," Powell replied.

I'm not yet prepared to make a judgment that it's white vs. Black and that's the answer. But there was something fundamentally wrong with the way in which forces were sent to the capitol or the intelligence that was coming out of the capitol or what the plans were to go there. In listening to some of the political officials in the Washington area in the weeks past, I didn't get a sense that they had really put their hands around it.

I heard soft things. You know, oh, let's not carry weapons. Let's not do this. Let's do that. And so it troubled me a bit. But I was just watching it on television. Now, you may be right. And what you saw on television may be right. But I'm not prepared to make that judgment that it's strictly black and white and white and black...You have to be careful.

Powell had strong criticism for Donald Trump: "I just want him out. I want him out of office," he said. But Powell did not advocate using the either the 25th Amendment or launching a second impeachment to remove Trump a few days before his term ends: "It's too late for that," he said.

Powell said he thinks the country will "rebound pretty quickly" once Trump leaves office: "Frankly, once Mr. Trump is no longer the president of the United States of America, and we have other people in the government and we have a new president, I think that things will settle down quickly."

'Where was the Congress?'

"The big problem that I have with all of this is that, where was the Congress in all of this?" Powell asked.

In all of the things that we have been doing, the Congress just went along with Mr. Trump. And usually, it was just the Republican side. But there were some things we did that showed that the Congress was not ready to do its duty.

In my years in the military in my years as national security advisor and as secretary of state, I welcomed congress challenging me for what I was doing. That's what they're supposed to do and that's what I'm supposed to listen to -- what should I be doing? What do you think I should be doing? And I would debate the Congress. I would argue with them. And we settled out the arguments after discussing them.

But that doesn't happen now. We have an extremely weak Cabinet that's getting weaker by the day. They're walking out now. And they did not challenge the president. You saw the movie, the television piece last week (about) the argument that the president was having with some people. And they told him the truth [that he lost the election].  But he didn't want to hear the truth. He said no, I am not buying that. We would never have seen something like that...

Powell said the ability of presidential advisers to speak openly to the president is "gone." "There's not a Cabinet now that understands this as well as they should, and they're not doing the job they're supposed to be doing."

Powell said he knows Joe Biden "quite well," and has "great confidence" in him.

"We've done a lot together. We've raced our Corvettes together," he said. "I think he is the kind of individual who will understand the issues and he will approach them with a genuine approach that he wants to hear what people think.... We don't have that now. The president just decides something and he reverses what he decided yesterday. That's -- that's chaos."