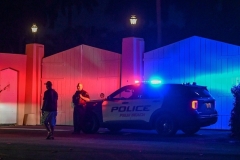 A police car is seen outside the Palm Beach home of former President Donald Trump's on August 8, 2022. (Photo by GIORGIO VIERA/AFP via Getty Images)

(CNSNews.com) - The Russia-Trump collusion narrative turned out to be a fantasy, but that didn't stop Democrats from painting the lies as facts, month after month.

Now, a Connecticut Democrat is telling people who criticize the FBI raid on Donald Trump's home to "shut up until there are some facts."

(It is a fact that the FBI executed a sealed search warrant on the home of a former president who may run against the current president whose Justice Department executed the raid.)

"I'm a member of Congress, and I have absolutely no information about what was in the (search) warrant," Himes said:

"There's all kinds of speculation out there, is there only the possibility there was classified information at Mar-a-Lago, is there more, is it less? Nobody knows.

"And it just sort of blows my mind that as the Department of Justice tries to navigate the very rocky waters of the intersection of the law, because let's face it, a lot of my Republican friends are saying, wait a minute, if they can do this to the president, they can do it for you. Of course they would do it to the president.

"The president, like you and me, Wolf, and like ordinary citizens is answerable to the law in the same way any other American is. You know, so of course they would do it.

“But it's enormously sensitive for the FBI and the Department of Justice right now, and so you ask me what I would say to my Republican colleagues. I get politics, but just shut up until there are some facts because there's some very powerful equities at stake here.

"If over time you whip up enough angry Trump supporters and sort of characterize this as a brutal abrogation of the law, somebody is going to get hurt.

“So I would hope that if you're a United States senator, and I'm hoping against hope in this regard, that you would take a little bit of a deep breath and be calm because you have no idea what was in that indictment, sorry, in that search warrant.

"And by the way, isn't it interesting, Wolf, that nobody knows what's in the search warrant because the Trump people who have it haven't released it. I don't know about you, but I suspect it there was exculpatory stuff or if there was something in the search warrant that wasn't terribly serious, we would have seen it many hours ago."